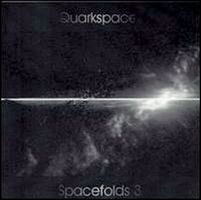 Space-rockers from Columbus, Ohio, Quarkspace are back with volume three in their Spacefolds series. This four track EP, while rooted in traditional space rock a-la Hawkwind nevertheless manages to display stylistic variety, from the bluesy "Freakin' with the Qboyz" to the funky "Sky & The Family Stoned." Despite some nods toward chordal structures and melodic themes, these are primarily loose jams that also sound as if they were recorded live, warts and all. While I've read good things about this quintet live, these recordings are, to my ears, a bit rough around the edge. The drums are severely dry and nearly artificial sounding and the bass is deeply buried in the overly-compressed mix. Guitar and keys lead the way, the latter focused mainly on digital piano rather than the standard bubbling synths so common in this genre. As is common in improvised music, some parts of the jams work better than others and at times the guitar and keys trip over one another resulting in muddy instrumental separation. For my money, I'd stick with the real thing (Ozrics and Hawkwind) though I'd still give these guys a try in concert.