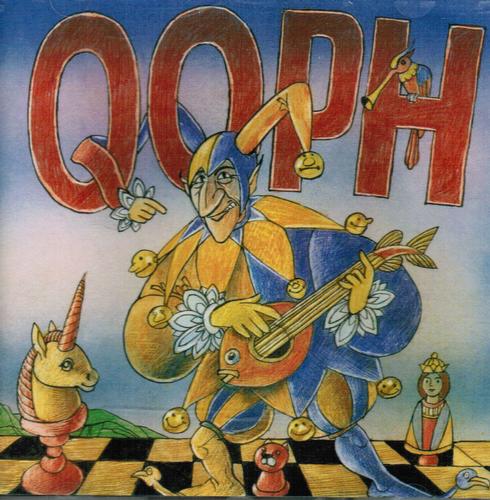 I don’t know if Qoph is Sweden’s answer to Finland’s Five Fifteen, but there are at least superficial similarities (perhaps augmented by the fact that I received this disc on the same day I got Five Fifteen’s latest). Like the Finns, Qoph play a flavor of hard rock spiced with psychedelic and progressive elements; unlike them, they sing in their native language and do not have a female vocalist. The basic element that recurs in most of the songs is a hard shuffling blues riff, but the band will vary it in unexpected ways, like going to an unexpected note or varying the time signature. For example, the initial section of the near-fourteen minute closer “Förförande rädsla” uses a riff very like ZZTop’s version of “La Grange” with an extra beat added to the end of every other bar. All of the songs are comprised of numerous sections, often in differing time signatures, keys and tempos. The centerpiece of the album is the three track “Nadir” suite. (My Swedish dictionary fails me miserably in translating Qoph, but I think all the parts have something to do with the moon.) The playing throughout is very tight, the musicians sticking together through all the abrupt changes of the arrangements. While the elements of Qoph’s music (blues riffs, multi-part compositions, and so on) are not uncommon, somehow their combination of those elements ends up sounding unique. Or maybe it’s just that they’re singing is Swedish. I’ve wracked my brain trying to think of valid comparisons for their sound, and the best I’ve come up with is what might have happened if early bluesy Jethro Tull had gone jazzy instead of folksy. Picture “New Day Yesterday” faster with a hyperactive jazz drummer and higher vocals.