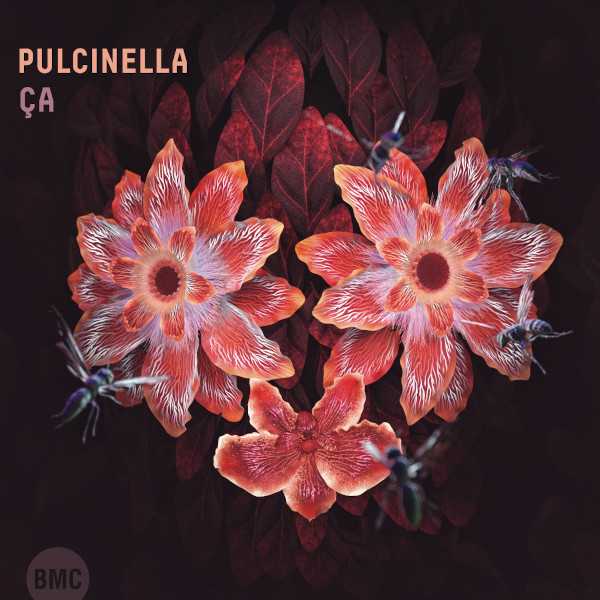 Pulcinella is a band from Toulouse that’s been around more than ten years, but Ça is the first I’ve heard of them, and quite a treat it is. The quartet features Ferdinand Dumerc (saxophone, flute, melodica, glockenspiel, etc.), Florian Demonsant (accordion, organ, vocals), Pierre Pollet (drums, vocals), and Jean-Marc Serpin (double bass, vocals), who have been constant since the group’s founding in 2004. These four musicians are extraordinarily omnivorous in their taste and influences, bringing together jazz, blues, salsa, samba, Balkan, funk, flamenco, and more. This is something like their sixth album, and it consists of ten tracks of joyfully boundary-busting music that is at times as complex and mind-boggling as such French groups as Poil and Ni, but has a gentle, playful touch due to the use of acoustic bass and the lack of electric guitar. One of their favorite modes is to set up up a precise rhythmic pattern between the drums, accordion, and saxes (sounds like multiple parts overdubbed) where the parts consist of short staccato notes and fit together cleverly; Pollet often uses cowbell-like sounds of different pitches as part of his drum kit, to particularly good effect on “Qu'est-ce qu'on attend?” which is just shy of four minutes of funky percolating energy. “J'ai caressé le chien du douanier” is another gem, starting with an almost goofy organ part that forms a bouncy rhythmic motif which is punctuated by short sax notes and what sounds like squeaky toys and duck calls, while bowed bass provides slippery notes. After a couple minutes of slowly increasing activity, the drum kit kicks in with a propulsive beat and the bass switches to a funky plucked line. And the title has a kind of absurd humor that appeals to me: “I Stroked the Customs Officer's Dog.” Ça is an adventurous and entertaining listen that balances complexity and fun in a most appealing way.