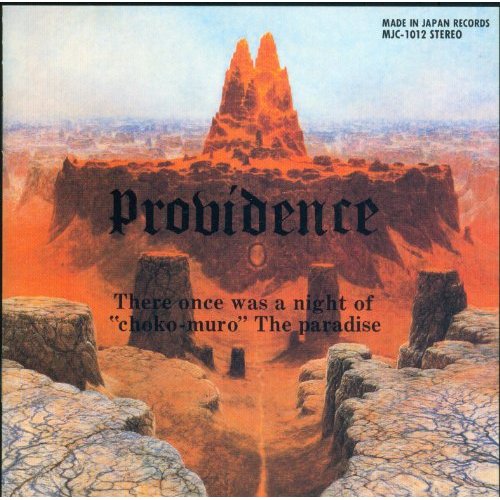 Some may recall the first, very highly regarded Providence CD And I'll Recite an Old Myth... from around 1990. At that point they had already released a couple cassettes, two videos, and appeared on the Prospective Faces compilation, all beginning around '85, and were generally accepted as one of Japan's most promising symphonic bands. Like many Japanese female-fronted bands, Providence's sound was loosely comparable to Renaissance during the mid-seventies, with various other elements mixed in, most notably a much stronger keyboard presence, and absence of all the saccharine pop baggage that Haslam brought to Renaissance. Sadly, the CD would be the end of the line for that edition of the band. Lead singer Yoko Kubota would leave to join a metal band, two other members taking their exit shortly after, leaving the remainder of the band in disarray. Around mid-'93 keyboardist/songwriter/leader Madoka Tsukada decided to put a new edition of Providence together with drummer Yuichi Sugiyama from the earlier band. A new guitarist, bassist and singer were recruited, and last year a demo tape was produced and circulated, featuring some new material, and some live versions of earlier tunes (none of the new tunes on the demo made it to this disc, incidentally).

This is the first CD by the new band, and a smoker it is. The new vocalist, while different in many ways from Kubota, wields a similar power and she is certainly up to the task of fronting this band. Compositionally, the two discs are similar (Tsukada penned all tracks on both), but the arrangements on Choko Muro tend to be a bit more hard edged and keyboard oriented than before. Still very lush and symphonic, the disc features seven tracks from just a hair under two minutes to almost twenty. The nineteen-minute three part title suite is the album's centerpiece, while the short meditative instrumental "Erlio" may be the most out of character. The second track "An Epilogue for Cajolment" is a bit too commercial for this writer's tastes, but it doesn't seem to harm the rest of the album. Overall, while this disc is probably just a little shy of the level of their previous, it still hails a remarkable comeback for, what is once again, one of Japan's most promising bands.