Austin, TX, long known as the musical capital of Texas, is normally associated in non-Texan minds with Willie Nelson and outlaw country bands. But Austin also hosts the annual South By Southwest (SXSW) musical and media extravaganza, which involved many musical styles. Most people don’t realize that Austin was the home of what was arguably the first psychedelic band, The 13th Floor Elevators. In addition, there is the annual Austin Psych Festival and Roky Ericson’s Ice Cream Social that bring bands like Acid Mothers Temple to Austin. Austin is also an incubator for progressive rock bands like House of Never, The Invincible Czars, Thirteen of Everything, and most recently Proud Peasant. 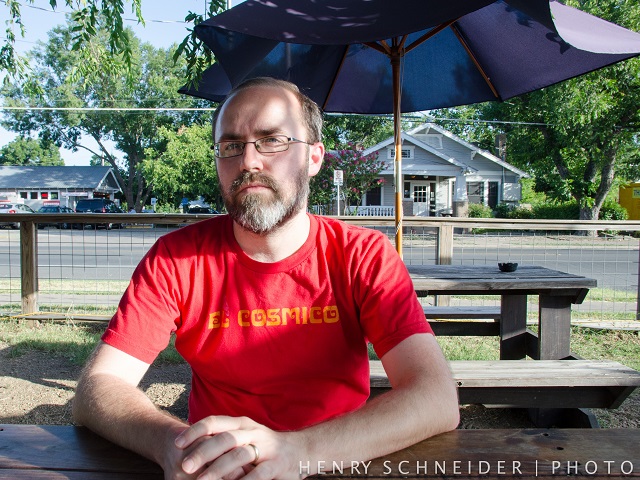 On July 8, 2014 I had the pleasure of meeting and chatting on a balmy evening in Austin with Xander Rapstine, the founder of Proud Peasant. We covered such a variety of topics in random order that I found it much easier to summarize and organize them into some sort of logical flow, as well as include some quotes here and there.

Xander is in his late thirties and has been involved in the Austin music scene for many years. His first band The Evildoers focused on pop music along the lines of Jellyfish (part of the Paisley Underground in San Francisco), The Cardigans, The Turtles, and The Zombies. He loved the multi-layered vocal harmonies of these groups, however, over time he grew tired of pop rock and wanted to insert progressive elements into pop music.

Xander moved away from Austin for a couple of years and then returned, where today he works in academic publishing for the University of Texas, which offers a great opportunity to pursue his musical interests, as it is a nine to five job. In 2011 he decided to follow his dream of composing and recording music like what the progressive bands of the 60s and 70s had produced. Over the course of two to three months he wrote the music. And what began as his project grew into a full-fledged band.

“What I was trying to do was emulate the bands I love from the late 60s and 70s and also the newer retro bands like Astra and Wobbler.”

How does someone born after progressive rock was suppressed by punk and New Wave find a kinship for the music? Xander grew up listening to his father’s classical music LPs and encouraged by his mother; his older brother was into bands like Kansas, Styx, and Rush, and that laid the groundwork for his musical journey. In high school he discovered Pink Floyd, and then moved on to King Crimson in college. In fact he is such a huge King Crimson fan that he owns virtually everything ever released by the band. He also cites Gentle Giant’s In a Glass House, Faust IV, The Dark Side of the Moon, Änglagård’s Hybris, Gryphon’s Red Queen to Gryphon Three, and Manfred Mann’s Solar Fire as major influences, along with of course Mike Oldfield. He also mentions contemporary bands such as San Diego’s Astra, Norway’s Wobbler, and the UK’s Purson as favorites.

“There is so much new music being released today of such high quality that it is sometimes difficult to choose what to purchase, the new stuff or bands from the 60s/70s.” 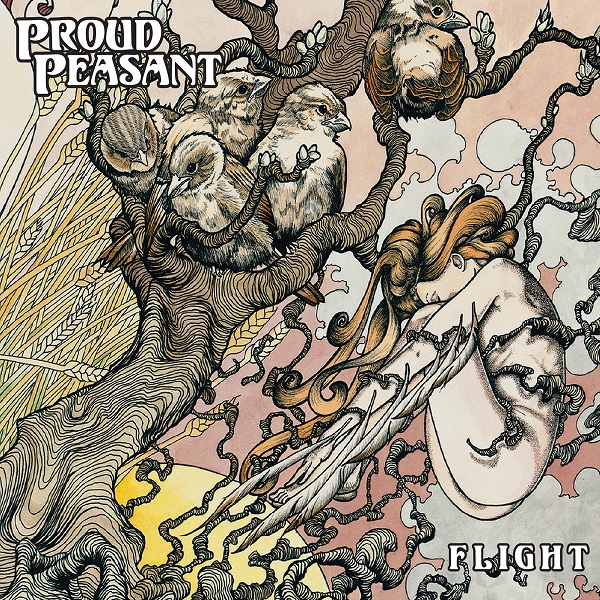 As the music on Proud Peasant’s first release, Flight, is complex and flows through many emotions and orchestrations, performing it live does present some challenges. Xander noted that Mike Oldfield faced these same challenges with performing his music live. What Oldfield did for the Montreux Jazz Festival in 1981 was to assemble a group of musicians he felt comfortable performing with and, rather than replicating the multi-tracked studio versions of Tubular Bells, QE2, Ommadawn, etc., they emulated the music. Xander also noted that Gentle Giant had a similar approach, where they reorchestrated their music so it could be performed live. Xander took inspiration from these two approaches and gathered several Austin musicians to form Proud Peasant (a studio band and a live band). The studio band is Xander (guitar), David Hobizal (drums, percussion), Jay Allen (keyboards), and Kyle Robarge (bass); the live band is Xander, Kyle Robarge (bass), David Young (guitar), Josh Denslow (drums), Charlie Campbell (keyboards), and Mark Poitras (keyboards, bells). The live performance is an electrified and amplified version of the album. The brass and woodwind instrumentation on the disc are emulated so their live performances end up being interpretations of the music.

As mentioned earlier, King Crimson is Xander’s all-time favorite band. And the final section of the album’s third track “The Precipice” was influenced by “The Court of the Crimson King.” Xander especially wanted to capture Fripp’s method of building the emotion and tension so that it eventually rolls over you. He has also composed a King Crimson-influenced piece for their next album called “A Storm of Swords” that also happens to be the title of the third Game of Thrones volume. This new piece will incorporate the dissonance so prevalent in Fripp’s music but at the same time it will not be a direct pastiche.

Right now, Xander is focused on finding an audience and building a fan base. They are gaining recognition internationally, primarily from The Laser’s Edge, Wayside Music, Gagliarchives, and Progstreaming. But this is not slowing down his plans for the future. Xander’s vision is that Flight is part one of a trilogy. Part two will be Communion. The music is already written and they plan to begin recording next year. Part three will be Dreeing the Weird, an Old English expression meaning accepting one’s fate.

Chris Panatier, who specializes in heavy metal band artwork, created Proud Peasant’s cover art. In actuality Chris’ painting is a triptych that Xander intends for the musical triology, and it will wrap around as well. There will also be some similar features in the music that will link each album at the beginning and end. But Xander is leaving the details as a surprise for now. 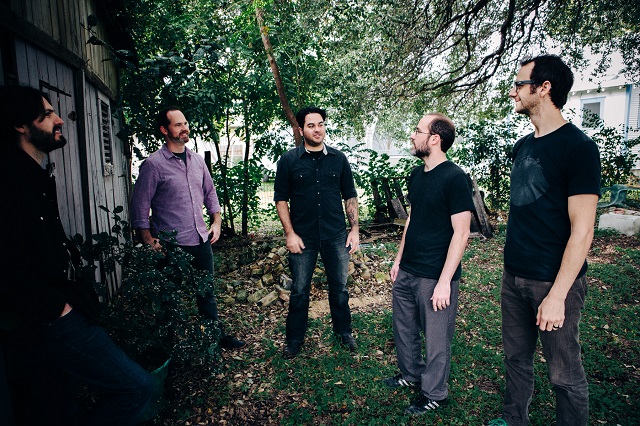 Forming Proud Peasant and the release of Flight has been a learning experience for Xander. Proud Peasant recorded Flight at Chico Jones’ Ohm Recording Facility in Austin. Chico has been in the business for 20 years and Xander worked with him with The Evildoers. Xander appreciates Chico’s ability to know how to get the best out of a band.

“What I like about Chico is that he has a very natural style of recording. As an engineer he knows how to get the best out of a band. I know that a lot of people say the same about other engineers, but this is actually true for Chico. He knows when to push you. Sometimes he’ll be a little mean. Sometimes he’ll be just unbelievably generous. He knows when to use it and when not.”

But Xander did not account for progressive rock fans. Most of us fans prefer the physical product over digital files. So under the advice from several people, he opted to have an initial run of 500 CDs produced. About 100 he reserved for promos, and they’ve already sold about half of the remaining discs since its release in May 2014. And now Proud Peasant has been picked up be a UK distributor which is a big step forward for them.

“I kind of set this bar for myself on what I would consider success and we’ve far surpassed it.”

Another lesson that Xander learned is that he did not set enough money aside for promotion, which he will do better for their next album. Xander is a man with a strong vision and that is sure to payoff in the future. He is also working with other Austin bands to plan and promote an Austin-based progressive rock festival for the spring of 2015, tentatively called the Voyager Music Festival. They intend to start small and grow it over the years.

Here's another clip of the band playing live, and make sure to check for more on our artist page for Proud Peasant.

DésAccordes (Erik Baron) - In C – Erik Baron is a French bassist we’ve heard from before (his excellent Cordayades CD from a few years ago was favorably reviewed in issue #29), but this time out his primary role is that of...  (2006) » Read more

Various Artists - Tales from Yesterday – With the blessing of original artwork by Roger Dean and performances included by three Yes alumni, this one contains a little bit of everything – some of the more 'faithful' covers, some...  (1996) » Read more

Rick Biddulph - Second Nature – If his name is a mite familiar, perhaps it should be. Biddulph is a multi-instrumentalist who had been a roadie and sound engineer for several Canterbury bands (Hatfield among them) before joining the...  (1997) » Read more

Various Artists - Electroacoustic Music #5 – In these days where electronic music is generally thought of as mindless dance beats with sampled accents, it’s important to remember that the pedigree of electronic music goes back many decades...  (2000) » Read more