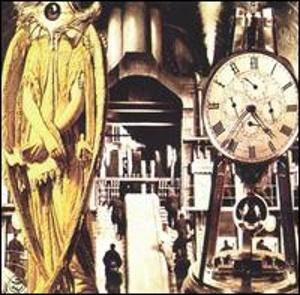 If a guitarist who calls himself Buckethead, wearing a white mask with a Kentucky Fried Chicken bucket on his head and claims he was raised by chickens doesn't frighten the crap out of you, then maybe this handy little collection will. The other two-thirds of this trio are the very well-known bassist Bill Laswell and the lesser-known drummer Brain. Eight of the ten tunes compiled here are pulled from the band’s second and third albums Sacrifist and Metatron. There must have been a good reason (perhaps legal) that nothing from the groundbreaking debut Transmutation is included, although the liner notes don't give any clue. It would have been nice to have some history or other info given with this CD. Most of the tunes are dominated by Buckethead's wild, self-indulgent, screaming-mad, million-notes-a-minute guitars over rudimentary machine-gun riffing. Sometimes it gets fairly mindless, as on the half-step ping-pong riff of "Skull Crack," but perhaps anything else would ruin the sharp contrast. A few guests appear here and there, but their contributions are fairly insignificant, especially the squawking sax of John Zorn. Two tracks really standout, however, and both of them are essentially all Buckethead. "Maggot Dream" is a somber acoustic-driven mood piece with a melodic solo that really shows off Buckethead's formal guitar training under Paul Gilbert. The other is a lengthy piece called "Dark Hood" which includes a massive amount of signal processing and seemingly computer generated tones in a dark ambient style not too far removed from Djam Karet's Suspension and Displacement. Overall, Praxis has got to be one of the best examples of "you either love it or hate it." As a collection, this release is too incomplete to warrant a high recommendation, but the two tracks mentioned above make it worth hearing.