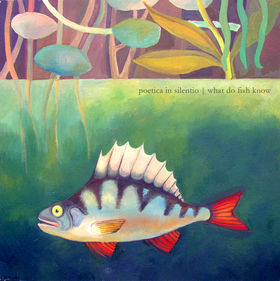 Over the last few years, a number of bands have tackled the problem of applying the best features of classic progressive rock to more modern sounds, and other bands seem to have achieved the same sort of result without consciously trying to meld the two styles. A few examples (and I’m not going to speculate which camp they belong in, or even how successful their efforts are) are Radiohead, Porcupine Tree, Thinking Plague, IZZ, and the Mars Volta. Poetica in Silentio is a Dutch band doing their own version of the recipe, and the result, aside from being rather difficult to describe, is quite an interesting concoction. The mix of electric guitar, acoustic guitar, and flute sometimes hints at Jethro Tull, but at times the flute is replaced by violin, and the character of the music changes. There are elements of 80s New Wave as well, along with the 80s King Crimson style. As befits such a diversity of sound, the arrangements are complex, with sections at varying tempos, intensities, and tonalities. Most of the tracks are vocal at the core, and less than five minutes long, but the album flows so well that listeners could think of it as an extended suite. The opening song, “Behind the Door,” is reprised near the end (though in contemporary fashion it’s called a “remix”), reinforcing the cohesion of the material — if I can use the word “cohesive” when the music is so unpredictable. All in all, a unique and interesting offering.