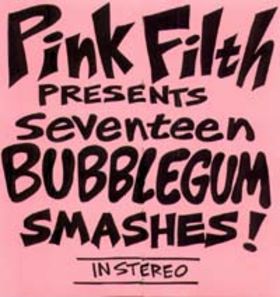 Um. This is not Pink Floyd, it is Pink Filth. The name is not only a clever pun to fool high school stoners into buying the album (if they could find it in any store on this planet) but it also is a pretty good description of the music. Pink, because it is disturbingly bubblegummmmmy and Filth for the complete lack of any polish. I could go on for two pages about all the influences I could find, so I'm not going to mention any. Oh, believe me I want to, but as soon as I think of one that fits it changes into something that is not even remotely connected except by one thing (you'd better sit down). None of it sounds anything like what is usually referred to as progressive. But in my opinion that makes it the most progressive of all. There, I got that out of my system. Part of it sounds like the music for that game Zelda. When I was 13 I spent an entire weekend finishing that damn game. Maybe Pink Filth did too. Damn it, I said I wasn't going to mention any influences. I guess the best thing about it is that I have no idea what the hell it is. It's not like you could find it anywhere any way. This will go along side the hundreds of thousands of other bands I like that nobody in the entire world has ever heard of. So what's the point you ask me, the point is that as long as people like Pink Filth make music that shows such a huge pop influence and such complete disregard for what the evil commercial recording industry wants them to be then there is hope. Hope that our children will get to grow up with cool radio stations that actually have good reception. Um. when I'm 60 will Marilyn Manson be on the oldies station? I just wanna know. Keep in mind that this particular listener has listened to such much weird music in the name of misguided art that he just doesn't give a damn anymore.