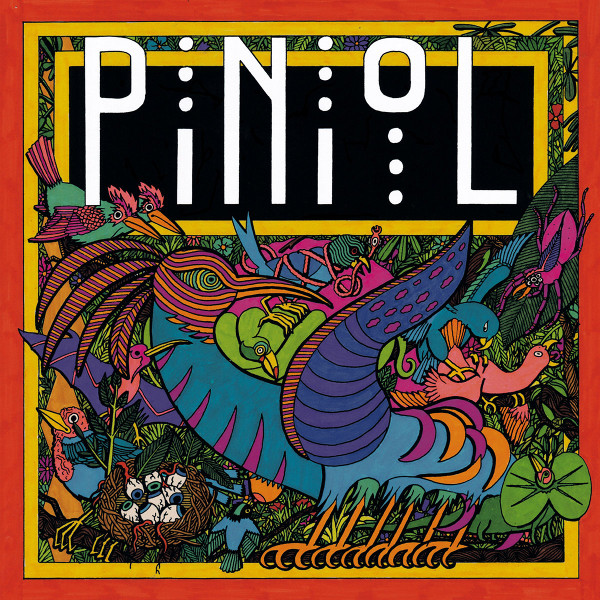 The band called Piniol is composed of Poil and Ni mashed together, with all seven members forming something a little like what King Crimson had in the “double trio” lineup. Two drummers, two bassists, two guitarists, and a keyboard player provide plenty of opportunity for noise and complexity, and Piniol delivers in spades. Stylistically, Poil and Ni are very much in the same realm, with crazy rhythmic figures, amazingly tight playing, and a punkish abandon, so it’s no surprise the unified band exhibits the same qualities. Quite wisely, the first track starts out with atmospheric keyboard sounds and builds up the intensity over a few minutes rather than pummelling the listener right out of the gate. “Pilon Bran Coucou” goes through a number of sections over its 14 minutes, including some nonsense vocals and burbling synths. The two drummers are mixed to opposite sides of the stereo spectrum, providing a nice effect, especially in headphones, and they do not play the same parts, choosing to accent different parts of the patterns. It is often difficult to isolate what the two bassists are doing in the arrangements, though there are certainly times when they’re playing the same part on the two sides, but their articulation is slightly different. Kudos to the mixing engineer for keeping the low end from turning to audio mush. With the two guitars, a variety of tactics are used, from unison riffs to interlocking contrasting parts to melodic harmonies. I particularly enjoy the balance of grooves and tricky rhythms — there are times when they set up a nice rhythmic pattern and just go with it for a while, and other times where they dive into erratic unison parts with precise stop-start maneuvers. Bran Coucou is definitely one of the best avant-prog releases of 2018.

Trio Fattoruso - Trio Fattoruso – It makes perfect sense that Uruguay would not be just another blip on the radar of finesse jazz and rock players. Brothers Jorge and Hugo Fattoruso have been playing various Latin and jazz styles for...  (2006) » Read more