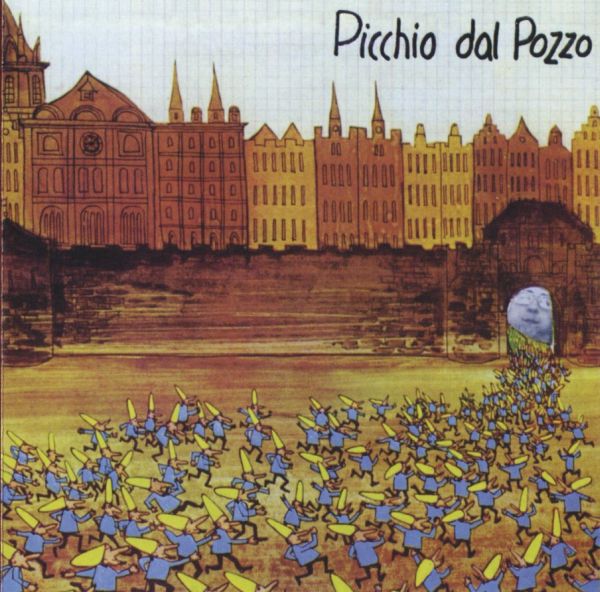 Slight changes in style between albums is common for most all groups, but Picchio dal Pozzo is not like most groups. Upon listening to their second CD after hearing the first, I did a double take and checked to see if I was listening to the same band. Rarely, if ever, have I heard a band change their sound so much between two consecutive releases. The core lineup is essentially the same for both releases, but the focus of the songwriting is quite different. On the self-titled effort, most of the songs are very rock sounding. There are even a few "slow songs" which are quite pleasant. Most tracks are based upon an ostinato with improvisation and melody development on top. Wind instruments, especially saxophone, are quite prominent and provide much of the sonic depth of the recording. Interesting use of stereo panning, multi-tracking, and processing often gives the saxes an unusual ethnic sound. The opening cut, "Merta," provides a good example of both the ostinato format – a cool alternating 15/8 and 17/8 part – and the processed instruments, and is one of the best tracks on the album. Vocals are used sparingly, which is too much for this band IMHO.

The second album has few characteristics in common with the first. Abbiamo Tutti i Suoi Problemi is much more arhythmic and polytonal. It is very reminiscent of Frank Zappa's jazzier works and similar to Tipographica in other places. Woodwinds are still relied upon heavily on Abbiamo, but the focus here is quite different. Instead of harmonizing with each other in normal modes, the winds are often playing in different modes and in different keys at the same time, creating a complex patchwork of sound. The results of this are often exceptionally complex and interesting harmonies. For example, one of the songs on Abbiamo recaps many of the melodies from the first album, but it's almost unrecognizable because of the difference in compositional style between the two releases. Unfortunately, this album has even more vocals than the first. For the most part, they are outright annoying. With these guys, there's a strong correlation between the amount of vocals, and how much I like the songs, so it's not surprising that I like the self-titled album better than Abbiamo. Jazz rock and polytonal fans would probably enjoy both these Picchio dal Pozzo releases, but fans of strong rhythm and melody won't like the second as much. For saxophiles, both of these are a must.

In the Berenstein Bears side universe, it wasn't Stormy Six on the original Rock in Opposition documents, it was Picchio dal Pozzo (the Henry Cow albums also all had mittens on them). While a lot of Italian progressive rock bands of the 70s can be traced back to the Moody Blues, King Crimson, and Vanilla Fudge, Picchio dal Pozzo seemed to draw more from Soft Machine and Robert Wyatt, Yet, other than some tonal similarities, the results were very different with Picchio dal Pozzo in many ways, creating something of a musique concrète / progressive rock hybrid, what's often called soundscapes these days. These were pulled together by the usual combination of instrumentation and studio trickery, but with not so much of the latter that you can't hear lots of musical sequences within. It's interesting to hear the influences at work used to develop a new whole, it often sounds like what might have happened if Daevid Allen had returned to Soft Machine after Third or Four and spent the night in the studio with the tapes. The whole album has a great warmth to it due to a lot of pleasant droning — vocals rise and fall, winds refrain passionately like they're part of the air and there's really only a light percussive presence to go along with all the keyboards creating much of the middle. It's really an endlessly fascinating album, a work that they'd even move away from by the time their second album was released.