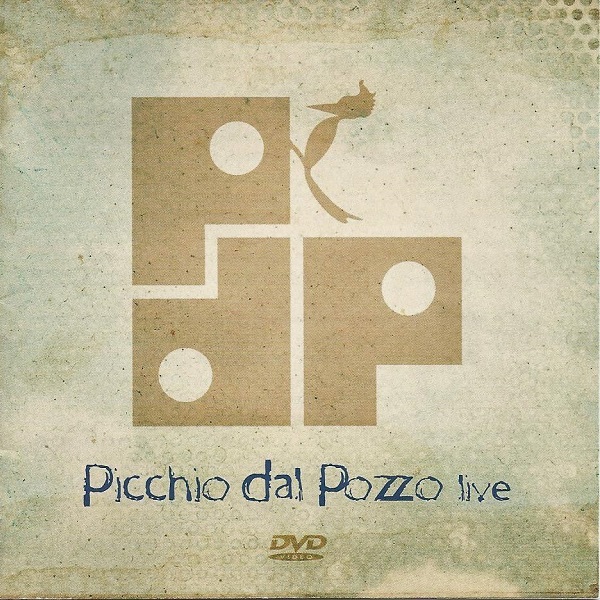 Picchio dal Pozzo has a long musical career dating back to the early 70s. Their first album, released in 1976, was an Italian spin on the Canterbury sound (Soft Machine, Gong, Henry Cow, and National Health). They are not a prolific band, only releasing four more albums in 30 years: Abbiamo tutti I suoi problem (1980), Camere Zimmer Rooms (2001), Pic_nic@Valdapozzo (2004), and a live album in 2008. Now they have released a DVD containing a concert recorded at the La Claque club in Genoa on 15 January 2011. The lineup for this concert included the original band members Aldo de Scalzi (vocals, keyboards, nylon guitar), Aldo di Marco (drums), Paolo Griguolo (electric guitar, tenor recorder, vocals), Giorgio Karaghiosoff (tenor sax), and Roberto Romani (tenor sax) plus new band members and guests Luca Crests (keyboards), Edmondo Romano (saxes, clarinets, low whistle, musette, flutes), Dado Sezzi (percussion, glockenspiel), Massimo Trigona (electric bass), Sergio Gazzo (live video art), and Jessica Cochis (alto sax). The concert is a mixture of newer songs and tunes from their first album and others from the 70s including “Adriatico” that was composed on Demetrio Stratos’ voice samples. The music is highly orchestrated with very tight arrangements. Most songs slowly develop over time, and with all of the reeds, you get some idea of the strong prog jazz element. And there is some very interesting experimental stuff happening as well, along with the video images.

In addition to the concert is a second DVD section title PdPedia that contains a fascinating documentary film about the birth of the band and its evolution over the years via several interviews with original members (subtitled in English). There is also a bonus video “BoccaSedro” recorded in their studio and intercut with images of the Italian countryside.

All in all, a wonderful compilation of material and a great introduction to this band.

National Health - D.S. al Coda – After passing away in May of 1981, Alan Gowen's last band National Health went on to record this, their third album, comprised entirely of material Alan had put to paper but never recorded. The...  (1996) » Read more