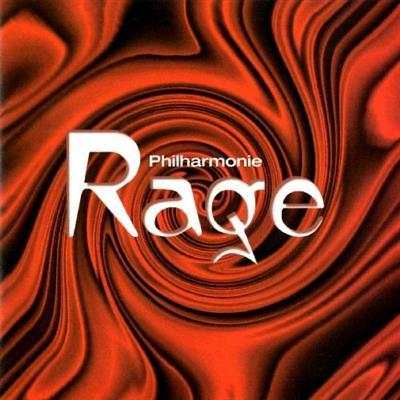 Perhaps a bit of history is in order. Philharmonie began in the late 80s as strictly a guitar trio, led by former Shylock guitarist Frederic L'Epée. Their first album, Beau Soleil, was a very fluid yet somewhat low key affair, but surely enjoyable. With the second album, The Elephant Bell Ringers, came a move to Cuneiform, and a sound that more closely paralleled Fripp's League of Crafties or the California Guitar Trio. For the third album, Nord, a drummer was added to the lineup, and their sound became more varied through using a wider range of instruments (including Bernard Ros' new full time position on the Chapman Stick). Rage is their fourth album and marks a big step forward on many fronts. The first change one may recognize is the strength of the compositions, which now seem to have a better sense of purpose, as opposed to being subservient to the three-guitar format. Another is the wider use of guitar effects and instrumental variety. But the most immediately noticeable change is in drummer Jean-Louis Boutin – he's actually doing something besides following the guitars, now adding a whole new dimension to the group-written material, and handling the kit in a more conventional way, giving their sound more backbone. Don't misunderstand, the music still reaches those wonderful intricate heights where multi-guitars weave a complex tapesty of interlocking arpeggios that will leave you breathless, but there's a lot more to their sound this time out and I'm sure most listeners will be pleased. If one liked the earlier discs, then this disc is certainly one to check out. For any readers that have never heard Philharmonie before, this is definitely the place to check them out. Highly recommended.

Steve Gorn, Tony Levin, Jerry Marotta - From the Caves of the Iron Mountain – Take a woodwind player and the early 80s rhythm section for Peter Gabriel (circa Security), put them together in a cave and you'd be surprised what they come up with! The second release from King...  (1998) » Read more