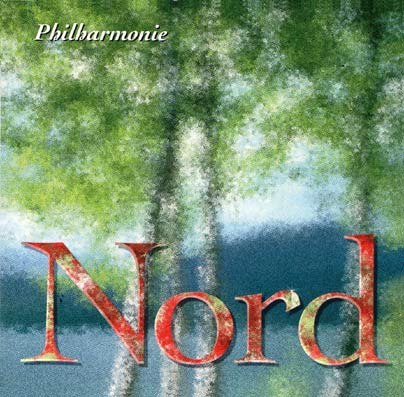 Philharmonie was formed as an electric guitar trio by Frederic L'Epee, best known as the founder and leader of the brilliant 70s French group Shylock. After a relatively unknown self-released debut in 1990, Philharmonie's second CD, 1993's Les Elephants Carillonneurs, was well received by the progressive community for its strong originality and mesmerizing beauty. Now L'Epee and Co. return with Nord, adding a drummer, and serving up more of their intricate interlocking rhythmic ostinatos and well written counterpoint. They use primarily clean electric guitar sounds, coaxing out a variety of timbres, occasionally augmented by an e-bow. The music is generally relaxing and contemplative, in a minimalistic sort of way, despite the constant motion and often complex interweaving lines. The addition of the drummer, as well as the prevalent use of the Chapman Stick, allows the band to execute greater dynamic contrasts, and at times gives the music a degree of energy and drive that was absent in the group's previous work. In some ways, perhaps, the use of drums and Stick, which often simply serves as a glorified bass, takes away some of the novelty and originality of the group. But for the most part, the uniqueness of having a few guitars supply all the elements of the music is still here, only some of those roles are now being shared with the new instruments. The drumming is tasteful and restrained; it basically serves to highlight the dynamic changes and augment the rhythms created by the interaction of the guitars, or to provide a foundation on which rhythmic variations can be overlaid. Nord is a solid 60+ minutes of music, comparable in quality and originality to other Cuneiform releases, though a bit mellower than their usual fare. Recommended.

It seems like only about six months since the last Philharmonie disc, these guys are a hard working group for sure! The original guitar trio of Frederic L'Epee, Laurent Chalef and Bernard Ros are now augmented by a full-time fourth member Jean-Louis Boutin on drums — which seemed like the logical next step from their first two. They've now almost completely shed the ethereal 'live' sound of the first disc, and taken the more structured approach of their second and built upon that even more. In addition, Bernard Ros is now full-time on Chapman Stick, giving their sound even more color and energy. Their trademark style is fluid, subtle, and uniquely French — energetic yet not busy, and unlike Fripp's League of Crafty Guitarists — to which comparisons might likely be made, though Philharmonie's approach to composition seems far more natural and effervescent, not so academic and rigid (which is not meant to be a slam on Fripp's music — I'm just attempting to point out differences here). The addition of drums brings the music a little closer to the jazz/rock axis, yet their presence is never overbearing, always yielding priority to the guitar and Stick work, essentially following the natural percussive attack of those instruments. Those who enjoyed the previous Philharmonie albums are sure to enjoy this one, as well as all fans of spirited guitarwork everywhere. For the newbie, this is probably as good a place as any to get on board.

Originally formed as an electric guitar trio, this French band led by ex-Shylock fretman Fredric L'Epee has expanded to a four-piece with the addition of Jean-Louis Boutin on drums for the release of Nord. Furthermore, Bernard Ros has taken on the role of all-time bass duties with his Chapman Stick, leaving only Laurent Chalef as the alter-ego to L'Epee. The ensemble functions more as a true band with this lineup, continually drawing stylistic comparisons to the 80s King Crimson dueling fretwork of Fripp and Belew. But Philharmonie take a less aggressive, more harmonic approach. Careful thought has been clearly given to the harmonic content of the stutter-stop guitar patterns that dominate each of the eight cuts, and how they intertwine and overlap. Interesting, but perhaps too academic of an approach with the end result being comparable to a partially successful experiment. To give credit where it's due, the guitar performances are both accurate and impressive, and the quality of the recording and mixing is superior. Philharmonie have a fresh, relaxing approach but it works much better in small doses than in large quantities because of the ever-gentle approach. Don't bother looking for a lot of variety in the guitar sounds, as anything resembling distortion or searing lead tones is deliberately avoided. Unusual and professional enough to recommend, at least marginally.