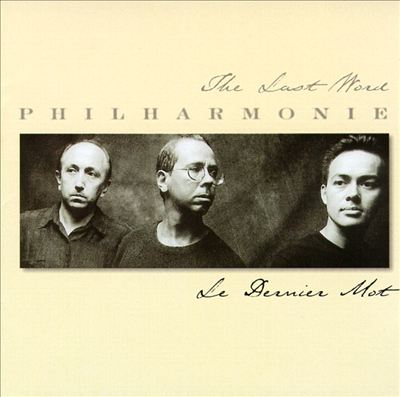 Philharmonie has been around since the late 80s, this being the band’s fifth and sadly, final album. The booklet notes make no bones about it – this is the end; a conscious decision by the band to call it a day at the end of ’97 and record this, their last album during the summer of ’98. Don’t let that fact slow you down, though. This is not a bunch of half-baked leftovers and live scrapings like the final Echolyn or Änglagård albums. This is the real deal, and without a doubt Philharmonie’s best release ever. The band is down to a trio here (apparently one member couldn’t wait for the end), but it’s obvious they saved all of their best material for this release. The opening track, “Rondo Argentin,” goes way beyond the Philharmonie of old, merging that ethereal moodiness so prevalent on their first album with a new spirited energy, rising to new levels. But even that won’t prepare the listener for the very Crimson-like “Metamorphose” – this sucker flat-out screams: this is the kind of music King Crimson should be making instead of wasting their time on all these half-powered Projekcts. Somewhere along the line Philharmonie linked up with new drummer Velodia Brice, whose style propels their sound into a more rock, less guitar-trio-like direction. “Sans Repose” uses the familiar interlocking multi-guitars to build an intense wall of complexity, overlaid with some brilliant leadwork by L’Épée. The band brings the level down a bit on the ten-minute “Hannibal à Capoue” with its extended improvisational intro. Seven tracks total, and all are outstanding. For Philharmonie, their last word is definitely their finest. My highest recommendation.