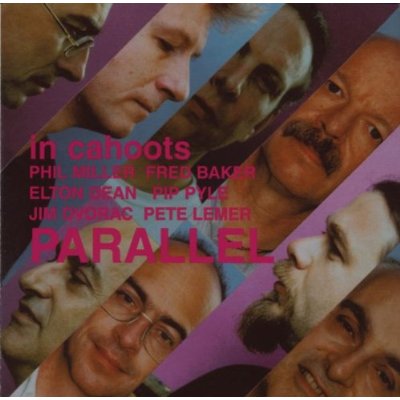 Canterbury guitar god Phil Miller's eighth post-National Health album is another notch in the tree for the player as composer. Phil seems to be on a sideways trend as he gets older to downplay his wonderful torn, angsty style in favor of jazzy interplay between the excellent musicians in his ensemble. This is enjoyable most of the time, since we still get to experience Elton Dean's sax playing in a more melodic and satisfying context than the free blowing outings he's known for. Pip Pyle, Miller's consistent childhood musician friend who has his hand in most of Phil's bands (including Hatfield and the North), always pushes things a bit keeping the timing crisp in the set. The newest element in this line-up, whom I'm only now appreciating, is trumpet player, Jim Dvorac. He first appeared on the Live in Japan disc from 1991, when I was not certain he fit in well with what I believed to be the direction of the group. I thought the scales tipped too heavy in his favor and the balance was lost, performing fewer heavy tracks. A clue in this course is Miller's Digging In which featured MIDI guitar with much of it very brass like. Now, Miller is apparently more satisfied with Dvorac taking the lead responsibility and only occasionally walking into the solo spotlight (as on "Half Life"). Personally, I prefer a little more brutality, Phil, though your composing is still getting more advanced. Thanks for the group disc, I'll adjust, a little... Maybe.