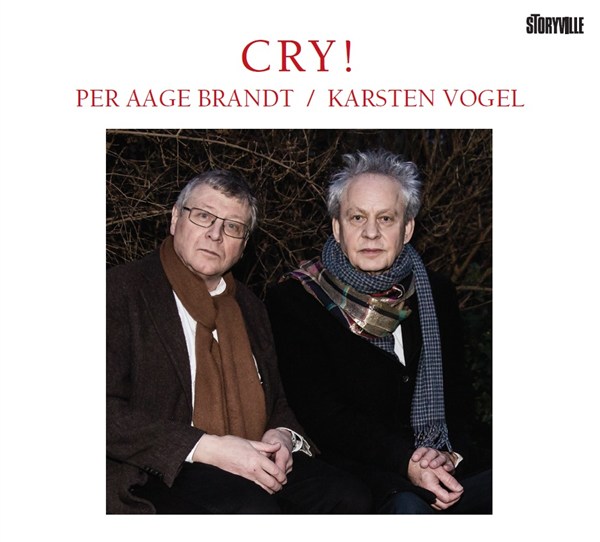 Pianist Brandt and saxophonist Vogel, long before the latter’s fame in Burnin’ Red Ivalhoe and Secret Oyster, played together in the Vogel Brothers Quartet in 1963. Don’t look for any recordings because there are none, although together and individually in those early years, the two played as sidemen in various jazz outfits, and are both featured on trumpeter Hugh Steinmetz’ 1966 album Nu! With Cry!, the two join forces again after a lifetime, during which time Brandt has continued to play and compose privately (although he did collaborate on a piece for the 2013 Burnin’ Red Ivanhoe BRI release), and Vogel has worked in numerous bands and more recently with guitarist Robin Taylor in his band Taylor’s Universe. But Cry! pushes the reset button for these two, going all the way back to their beginnings and their love for 50s style avant-garde jazz (think Ornette Coleman, Cecil Taylor, Archie Shepp, Don Cherry, and others), a style which was very popular and influential in their native Denmark. The two are joined by relative youngsters Klaus Menzer (also of the recent Burnin’ Red Ivanhoe band) and bassist Flavio Perrella, who together support the team superbly. All of the ten tunes here are originals by Vogel or Brandt or collaborations thereof, with the sole exception of the closer “My Funny Valentine” by Rogers & Hart, performed much in the way Albert Ayler might have played it back in the day. In all, this is a fun and magical trip back to the early 60s in the Brandt / Vogel wayback machine.