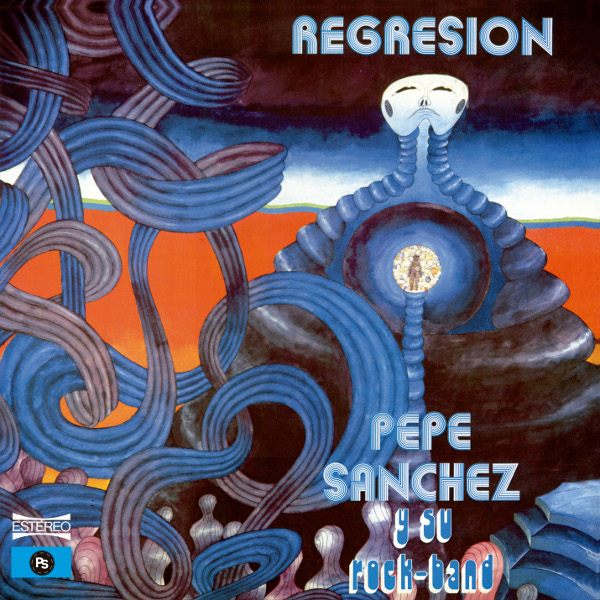 Pepe Sánchez is a Spanish drummer who began performing in 1959, working for record labels as a session musician and also playing non-stop with orchestras in Casablanca, Tangiers, Gibraltar, Basel, etc. After returning to Spain, he was a regular at the Whisky Jazz Club in Madrid, as well as playing with other Spanish jazz session players. In the 70s Pepe came to the US and worked as a session drummer at Criteria Studios in Miami, recording for Barbra Streisand, Andy Gibb, and Julio Iglesias. He also toured Japan as part of Barry White’s band. About this time Spanish label Marfer offered Pepe a recording contract for his first solo album. The idea was for Pepe to create an instrumental album based on flamenco music and Spanish folklore, featuring electric guitars, electric bass, drums, etc. So Regresión was born. Now 40 years later Pharaway Sounds is reissuing this album on CD. In addition to the seven instrumentals, there are two bonus tracks from a 45 rpm single released in 1980. Overall the music is a fusion of laid back jazz, funk, and latin music in a pseudo-rock format. The album opens with “Sentimento,” which was also chosen as the first single. This is a dancefloor song with a funky guitar riff along the lines of Isaac Hayes’ “Theme from Shaft,” wailing trumpets, and a jazzy flute solo. Track two is “Paisajes,” an interesting instrumental that begins with a bass riff that is taken up by electric guitar followed by cascading piano notes. There are some Mid-Eastern sounding classical music elements mixed in with electronics and latin jazz, as well as a phase shifted drum solo. Track three is the title track, beginning with ambient nature sounds, piano, and trumpet. The first half is quite introspective. At the mid point Pepe plays an energetic drum solo for about a minute and then the band jumps in with an uptempo Moorish theme with brass instruments and castanets. Track four, “Nostalgia,” anticipates the popularity of the rise of world music in the 80s. Next is probably the best track on the disc, “A Mi Tierra.” This track features electric piano, Spanish guitar, flute, and trumpet and could easily have been featured in one of Morricone’s spaghetti westerns. “Cantares” is another latin / jazz / funk instrumental with brass accompaniment. The original album closed wiht “Renacimento,” another introspective instrumental with an excellent Spanish trumpet solo. Fast forward four years to the bonus tracks and the music has evolved a bit. “Encuentros en la 5th Dimensión” features new sonic elements: wordless female singing and odd electronic sound effects The latin jazz themes are still present and right in the mix is Beethoven’s “Für Elise” with a funky beat. As strange as this may sound, it really works! The other bonus track is “Love Me” with its steady 4/4 beat, funky bass, great drumming, and “Shaft” guitar riff. This is an interesting slice of musical history from a country that did not greatly embrace progressive and electronic music until much later than the rest of the world.

The Moody Blues - The Magnificent Moodies – In December '64 The Moody Blues first hit the U.K. charts with a cover of U.S. soul singer Bessie Banks' "Go Now," with its expansive harmonies sounding a bit like a British take on the Righteous...  (2007) » Read more