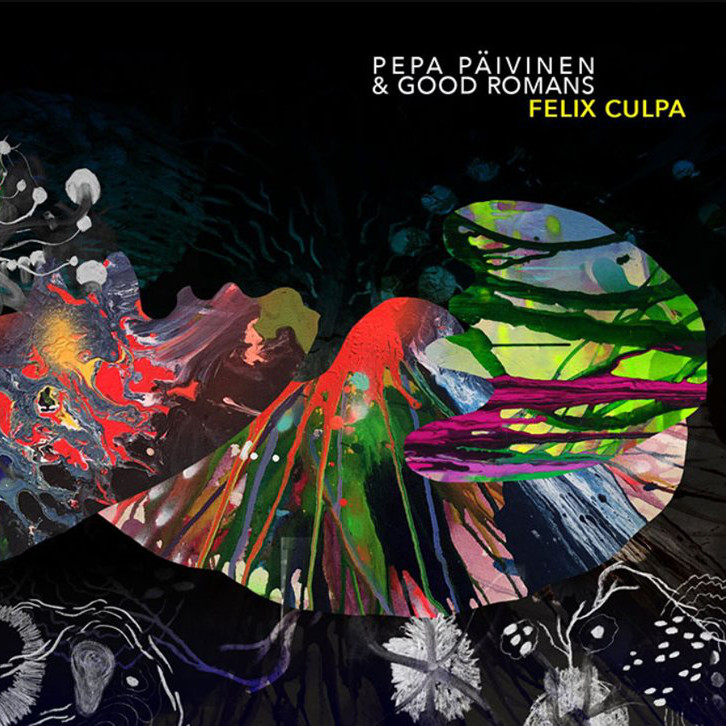 Felix Culpa is the third release by reedman Pepa Päivinen and the duo Good Romans, which consists of Ilari Filander (guitar) and Jussi Miettola (drums). The album features 12 tracks of improvisations, none of which pay much heed to tonality or pulse. While I wouldn’t recommend the music for listeners who favor melody and traditional structures, I find it quite enjoyable. Often the mood is on the meditative side, without a lot of sonic density to clutter up one’s attention. Päivinen contributes a variety of instruments, from saxes to bass clarinet and what sounds like several kinds of flute — the credits just say “reeds,” and there are electronic devices involved, so it’s impossible to say for sure. His playing is sometimes highly melodic, but at other times ventures into sound effects like blowing through an instrument without engaging the reed, and sometimes is looped to provide soft carpets of notes. Filander uses both electric and acoustic guitar plus occasional banjo, and at times uses a pedal to drop the notes down into the bass register. There are sometimes squalls of feedback, but they are kept to a low volume and act more as atmosphere than foreground. He also utilizes a lot of different techniques, and generally avoids chords in favor of single lines and effects. Miettola’s percussion features a lot of metallic bell and gong sounds, and many sounds of indecipherable origin. There is usually not a steady pulse, though I must admit my favorite track is probably “Ghost Returning” which has a quietly throbbing beat on the toms for most of its duration, along with dissonant guitar tones and some beautiful bass clarinet work. Felix Culpa is certainly a release that’s pretty far out towards the free side of jazz, though it’s an example of how good freedom can be in the right hands.

Murray Head - Restless – Murray Head is one of those few mid-60s singer/songwriters who seems at home on the silver screen as much as in a recording studio. In a career that has spanned almost four decades, it's clear...  (2002) » Read more

Twelve Cameras on the Moon