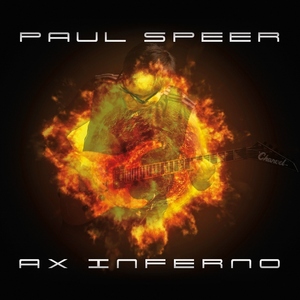 Paul Speer is a guitarist and producer originally hailing from the Pacific Northwest, probably best known for the two hit instrumental albums he produced with keyboardist David Lanz in the mid-1980s, Natural States and Desert Vision, and more recently collaborations with Queensryche drummer Scott Rockenfield. His latest all-instrumental release Ax Inferno explores cyclical multi-layered electric guitar visions in a somewhat electronic setting, not at all unlike the work on his 1984 solo LP Collection 983: Spectral Voyages, though the technology available today is far beyond what was at hand thirty years ago. For the most part this is a solo effort with Speer overdubbing all the guitars, bass, synthesizers, and a generous helping of studio effects, setting up self-sustaining patterns, loops and textures, with drummer Ron Krasinski sitting in on four of the seven main tracks. There is a definite groove at work throughout all of these cuts, propelling the sound forward while layers of spacy guitar riffage are superimposed one over another. “Megatron” closes the main part of the album with a very impressive exhibition of tasty guitar pyrotechnics in a somewhat psychedelic electronic setting. The final two cuts are ‘techno mixes’ of the two opening tracks “Contents Under Pressure” and “Accelerator,” both respectful of the rock mix versions and not overdosed with a lot of techno-chatter. While Ax Inferno straddles the fence between electronics and rock, it’s a solid effort that deserves to be heard.

Romantic Warriors, Tower & Secret Cinema – These titles are all combined as these are all projects either including Beppe Crovella or being one of his projects. Crovella was Arti e Mestieri's keyboard player and is the resident producer...  (1995) » Read more