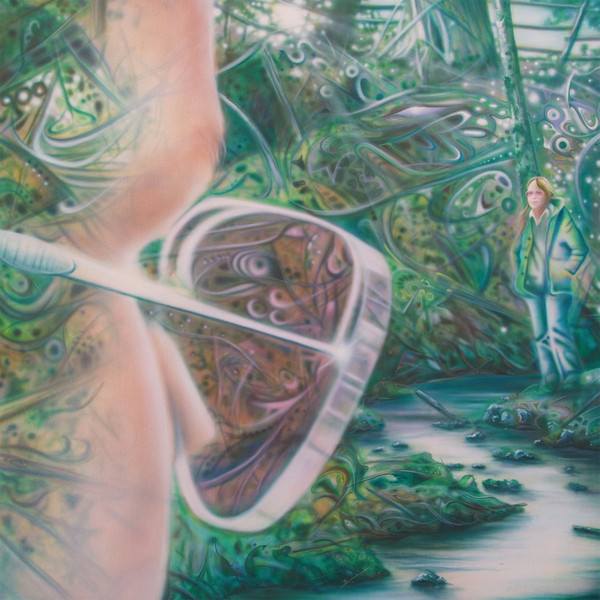 British Columbian Paul Marcano is an obscure musician who released several cassettes in the early 80s. 10,001 Dreams on C-90 was a sequel to his first release, Islands in Space. 10,001 Dreams is now reissued as both an LP and CD. Obviously the full cassette would not fit on a CD, so the double LP reissue contains the additional 14-minute track “Primordial Therapy.” This home-recorded album is Paul’s attempt at emulatng Manuel Göttsching’s manually sequenced and echoed guitar technique. While Inventions for Electric Guitar and New Age of Earth were ground-breaking albums, 10,001 Dreams pales in comparison. Most of this album seems to be variations on the same theme, that meander aimlessly. Initially a pleasant listening experience, it soon becomes boring. Paul’s lightweight vocals are occasionally buried down in the mix and unintelligible. Coming in at different points in the album are hints of Popol Vuh, Syd Barrett, and acid folk. He does try some experiments with the shifting tempos and sounds of “Visual Breakfast,” the completely reversed “Maj Moorhsum,” and sound manipulations. Probably the best cut on the album is the 23 minute “In Memory of Being Here,” but certainly not worth the price of the album. It starts out with a country blues vibe, wanders into Syd Barrett territory, becomes ambient, makes a visit to Ashra, and encounters a flute, white noise, and odd ambient noises. Some of these elements just do not work together on this track. Caveat emptor: do not believe the hype you may see for this reissue. 10,001 Dreams, in my opinion, is not the underground psychedelic masterpiece they’d like you to believe.