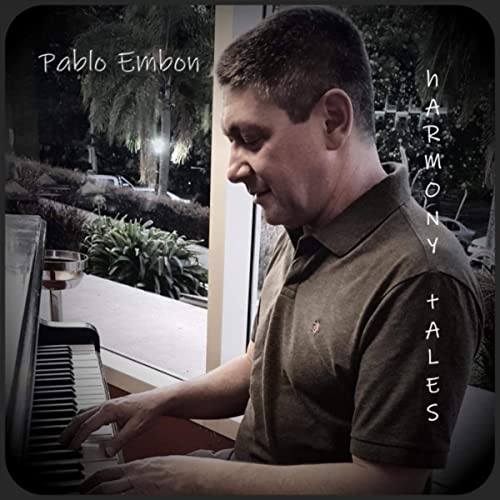 Argentinean born composer and multi-instrumentalist, by way of Israel for the past thirty years, Pablo Embon has released close to twenty albums going back to 2005’s Time to Remember, maybe even more that I’m unaware of, though the only one I have ever heard is the album at hand, released in April 2020. Harmony Tales features a dozen cuts which could best be described as tasty, ear-friendly jazz, informed somewhat by orchestral, fusion, and Middle Eastern, latin, and world flavors. The amazing thing is that Embon is an accomplished multi-instrumentalist who composes, arranges and plays all of the parts in the music he creates, including all guitars, piano, synths, bass, and drums, all played like they were his primary instrument. In fact, he began his musical training at age seven on guitar and piano, and after playing in several bands in his youth in Argentina, he also mastered several more instruments, studied advanced composition, orchestration, recording, and production. His detectable influences seem to be Chick Corea, the early version of Return to Forever with Airto Moreira and Joe Farrell, bassist Jaco Pastorius, Pat Metheny and Lyle Mays, though Embon runs with his own ideas. Standouts abound in this set, including “My Little Magic Box,” that has a bouyant and lilting feel and unforgettable melody that would have seemed a perfect fit in Kit Watkins’ early catalog. “Song of India” is an eastern-influenced piece that features a melody on synthesized woodwind alternating with upbeat jazz swing. A light funky, breezy feel personifies “Our Time,” punctuated with Embon’s piano musings and a brilliant guitar solo, almost sounding like something Sea Level might have done in the 70s. “Nothing Left Behind” embraces a moody feeling that opens into a magical path for piano and guitar solos, a very tasty piece indeed. Curiously before receiving this disc as a promo I had never heard of Embon, but why? He certainly deserves wider recognition.

Cyrille Verdeaux - Messenger of the Son – Verdeaux' name should be familiar to many, he was the main mover in the intensely symphonic seventies French band Clearlight, whose first two albums Symphony and Forever Blowing Bubbles are essential...  (1996) » Read more