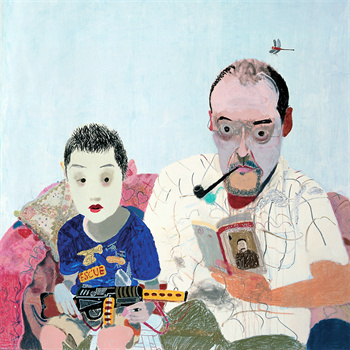 After the magnificent City Weather Sailing, I was wondering what this Nanjing band would come up with. They'd produced a series of albums of increasing depth and complexity, so 1984 came with high expectations. It's probably a good thing they backed off on the extended instrumentation to focus on the driving post-punk that forms their core, but I'm glad they've retained some little touches to augment the bass/drums/guitar lineup, most notably some really interesting keyboard tones. There are some odd distorted organ sounds, clear bells, and atmospheric sounds of indeterminate origin. Possibly even Mellotron flutes. Yang Haisong's vocals will still be the litmus test for most listeners, but I've come to find his rough style endearing and expressive, even though many of the lyrics are well beyond my meager Chinese skills. His somewhat monotone spoken-sung style leaves the melodies to the guitar and keyboards, and these are one of the band's real strengths. Even when playing chords, the guitar manages to provide (or at least imply) melodies, and in other places, it's one of those unusual keyboard parts handling the role; sometimes they work together, either in unison or in harmonies. All in all, well crafted, sophisticated music from a part of the world deserving of more attention.