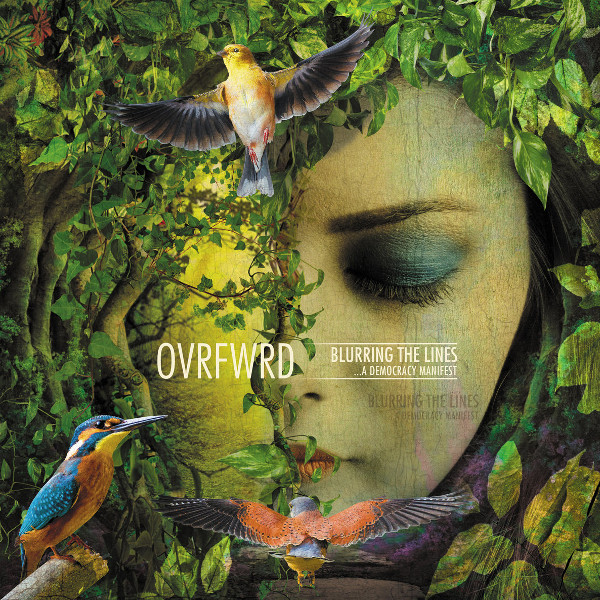 Since their first album in 2013, Ovrfwrd has been honing their craft, taking their time and producing quality music. With their third studio album, they’ve arrived at a sophisticated instrumental blend of styles new and old. These tracks touch on a variety of styles and moods while retaining a sense of identity and continuity. Much of Blurring the Lines sounds like something that could have been recorded in the late 70s, with Hammond organ, piano, and vintage-sounding synths along with guitar, bass, and drums that don’t venture into recent trends, but the music doesn’t sound dated at all. As instrumental progressive music, it shares some commonalities with bands like Deluge Grander, Mahogany Frog, Eccentric Orbit, though Ovrfwrd has their own take on the style. One thing that really struck me in listening to the album is how well it works as a whole, starting out with “Wretch,” which fades in with a big chord on keyboards to introduce stabs of distorted guitar and finally a rolling mid-tempo rhythm from bass and drums. It develops into a great tune featuring leads from guitar and synthesizer and backing from organ and piano. The next track ramps up both tempo and intensity, with fast riffing and precisely executed breaks, an aggressive bass line and what sounds like mallet instruments (but is most likely keyboards). And just when it’s needed, we get a lovely acoustic guitar piece called “Kilauea,” which is a bit like Steve Howe’s short solo pieces on Yes albums, both in functionality and skill level. In spite of its title, it has more in common with classical guitar music than Hawaiian styles. Next comes the throbbing synthesizer and heavy drum beat of “The Trapper’s Daughter,” which also features mallet instruments (real ones credited this time). Later we get more tastes of acoustic music, with sitar featuring prominently on “Cosmic Pillow,” reminding me of some parts of the first Shadowfax album. “Mother Tongue” shows us another side of the band, with more improvisation. And to finish off after this well-designed rollercoaster of ups and downs, they leave us with “Usul,” a dramatic piece that ventures into atmospheric moods, providing a perfect end to the journey. Ovrfwrd is richly deserving the attention of progressive music fans, easily equal in quality to many more well-known bands.

Instrumental prog group Ovrfwrd released their fourth album — third studio album — Blurring the Lines in the summer of 2018, but I did not receive a copy to review until a few months ago. Ovrfwrd continues to grow and mature their chops with the twelve new instrumentals on Blurring the Lines. I’ve been thinking about the title and my guess that the meaning is that they blurs the lines between genres on each of the twelve tracks. This is pretty sophisticated music that will appeal to those listeners who enjoy complex compositions and instrumentation. The blending of genres varies from track to track. Be it symphonic prog blending with jazz fusion, melodic prog with metal prog, percussive dissonance with delicate bucolic acoustic guitar, raga rock with Brian Eno ambiance, jazz fusion with King Crimson heaviness, etc. Ovrfwrd never fails to please. This is one cool disc. Personal favorites include “Cosmic Pillow,” that starts with simple drones and sitar to morph into raucous heavy prog, the cool eerie snow covered boreal forest of “Taiga,” and the intro to “Usul” that begins with white noise and bass, eventually moving into harsh territory with aggressive guitars. Definitely an album worth investigating while you are riding out the coronavirus and practicing social distancing.

Else Teicher - Whored – Very little is available regarding Ms. Teicher, the only information I could find is on the BlRR web site. Apparently Else has been releasing limited run cassettes and CDRs for the past 20 years, and...  (2011) » Read more

Robert Rich - Geometry – As the title implies, this reissue — originally recorded in 1987-88 and previously only available as a French import CD — crosses the bridges between mathematics and music, applying these...  (1995) » Read more

Gongzilla - Suffer – First of all, Gongzilla's Suffer isn't the non-stop smokin' and jammin' album some people think it is. Rather, it's well balanced, with both excellent guitar work (by Bon Lozaga...  (1995) » Read more

Elton Dean / Sophia Domancich - Sea of Infinity & Avant – Two of the late Elton Dean’s last sessions as leader and co-leader have been championed by Hux records in the UK. Sea of Infinity captures him again leading an out session careening through...  (2008) » Read more