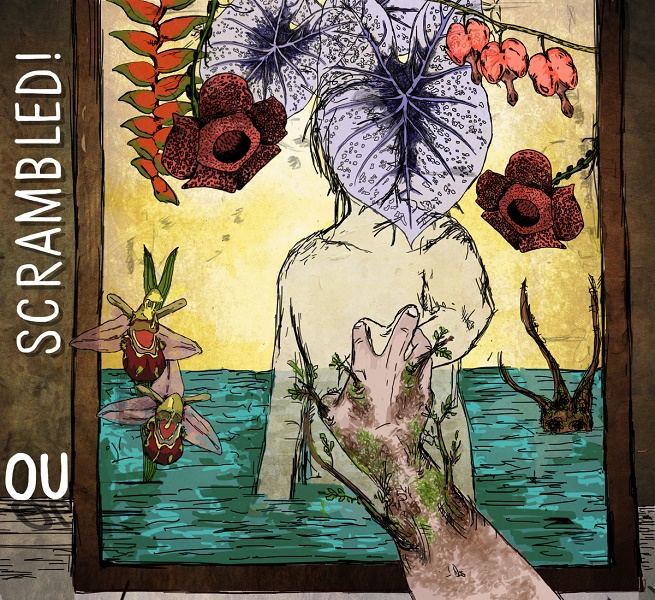 I happen to live in the same part of Seattle as Amy Denio, so we bump into each other from time to time. Not long ago, we happened to see each other at the local record store, where a mutual friend’s band was doing a CD release party. She reached into her purse and brought out a CD for me. It’s an Italian band she’s been working with for a number of years, Ou, whose name means “egg” in the Sardinian dialect. Amy’s pretty reliable, so I was reasonably sure it would be worth hearing – man, was that an understatement! Scrambled! is thoroughly enjoyable from start to finish, and engaging amalgam of more styles and influences than I can enumerate in concise review. At the core, you could say it’s a kind of gypsy jazz, and elements of avant-rock, cabaret, and more are melded seamlessly into something that is both entertaining and intellectually stimulating. The musicianship is flawless, to the point where I can’t single anyone out. In the order listed in the credits, the players are Ersilia Prosperi (trumpet, flugelhorn, and ukulele), Martina Fadda (lead vocals, whistle, percussion), Claudio Mosconi (bass), Cristiano De Fabritiis (drums, percussion), Cristina Pecorario (alto sax), Andrea Pesce (keyboards, programming), and Amy Denio (sax, clarinet), with all of them contributing backing vocals. All of the singing is outstanding, and seems to be in at least four different languages. Fadda’s voice is expressive, negotiating some challenging melodies with ease, and all of the backing parts are imaginatively arranged and perfectly executed. Whether navigating tricky rhythms or going off on crazy tangents, this band makes it sound easy. For Exposé readers, it would make sense to conjure a combination of Hamster Theater and The Science Group doing a Kurt Weill tribute, but that kind of comparison doesn’t really capture the sound of Ou (but I’m confident that fans of any of those would likely enjoy Scrambled!). Denio’s production is super clean, with the lack of guitar being turned into an advantage, allowing the other instruments to jump out of the speakers (or headphones) and really shine. And I’d probably best stop writing now before my gushing gets awkward and embarrassing.