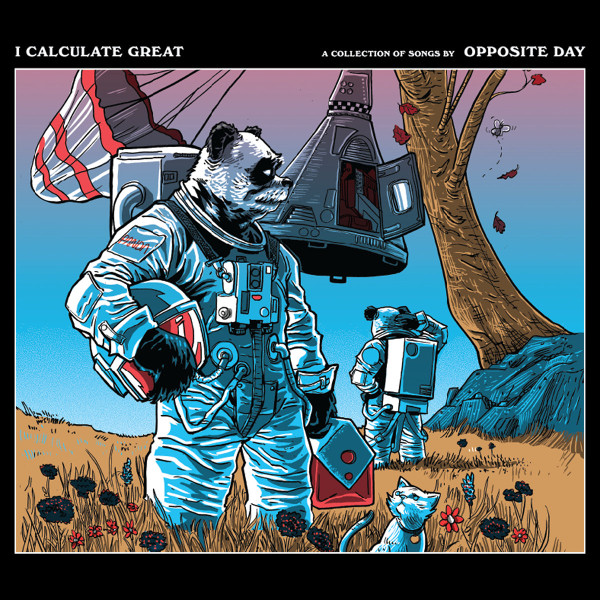 Austin’s Sam Arnold and Opposite Day are back with a vengeance on their new album, I Calculate Great, their tenth album. Looking at the cover art, I surmise that a couple of panda astronauts in an alternative universe made some wrong calculations with their “Panda Formula,” developed a “Radar Face” by staring at the screens too long while suffering from scurvy and trying to answer the question is there “Life on Mars?” subsequently landing on the wrong planet in their Mercury capsule in the middle of a tornado and getting stuck in a tree. The pandas then investigate the “Noise Noise” heard on entry and assess “All of Our Mission” by walking in a field of poppies and carrying a six-pack Igloo cooler. But perhaps I am reading too much into this. Coming from a different angle, I Calculate Great presents eight new original songs and two cover tracks that blend heavy bass riffing ala Les Claypool, rapid aggressive drumming, strong progressive guitar work, and the Tornadorchestra (mallet percussion, piano, cellos, woodwinds, violins, violas, and trombone). Opposite Day’s new drummer Eoghan McColskey is excellent and full of energy. And of course Sam Arnold on guitar and Greg Yancey on bass continue to push the envelope. The guests, The Tornadorhestra, include members of other bands in the Austin community such as Stop Motion Orchestra, The Invincible Czars, and Sam Arnold and the Secret Keepers. The two cover tunes, for me, are the album highlights. It is very brave of Opposite Day to cover David Bowie, especially one of his iconic tunes “Life on Mars?” Opposite Day have actually reinterpreted this song using their distinct sound. In fact, you don’t even recognize the song until Sam’s voice enters with the lyrics. They have created an excellent and wonderful heavy prog-metal version. And the album closer, which is arguably the best track on the disc and could be the best Opposite Day tune ever, is their superb rendition of Ravel’s “Bolero” that showcases each band members’ strong chops, be it on drums, bass, or lead guitar. Sam’s multi-layered guitar shows a true appreciation for this well known classical music piece. And just like an orchestral performance, Opposite Day slowly builds to a bombastic climax and essentially a “mic drop” to close the disc. Opposite Day are on tour during October 2017, so if you happen to live in Austin,TX, Denton, TX, Kansas City, MO, Lawrence, KS, or Tulsa, OK make it a point of hearing them live.

Let it never be said that Opposite Day are slacking in any respect. Since 2008 they have released a string of recordings that have honed their “math-pop” sound to a fine edge. What, you might ask, is “math-pop”? It’s a lot like math-rock only more melodic than your average practitioner, so you have complex metric structures, interlocking lines on the bass and guitar, and precise coordination between all the parts. But on top of that you have Sam Arnold’s great voice belting out catchy melodies with interesting lyrics. All of this is packed into concise songs, none of which tops five minutes in length, and it never really tips into metal territory in spite of the flashy guitar work. There’s a relentless energy that can leave a listener longing for a little break, but no, they dive right back into another crazy riff with sixteenth notes on the guitar, with only brief sections of relative peace. Greg Yancey’s bass is fluid and funky, meshed precisely with Pat Kennedy’s drums, and they always know where the one is, even if the listener gets lost. Arnold’s guitar parts are all over the place, with arpeggios, countermelodies, tapping, wild solos, and effects, and how he manages to sing and play such parts at the same time is beyond me. For this studio recording, he’s also overdubbed a lot of extra guitar and vocal parts, and Yancey adds some keyboards, further beefing up the sound and adding some variety. In a few places, there are guest players as well, contributing brass, woodwinds, strings, piano, and mallet percussion. Their take on Bowie’s “Life on Mars?” brings the iconic song into their idiom, though it is somewhat less frenetic than the average Opposite Day original. Very wisely, they end the set with a short arrangement of Ravel’s famous “Bolero,” which is by far the least complicated thing they do, building the familiar melody over the course of four minutes to its big climax. I Calculate Great is an impressive album from start to finish — just don’t expect to get any time to breathe while listening.