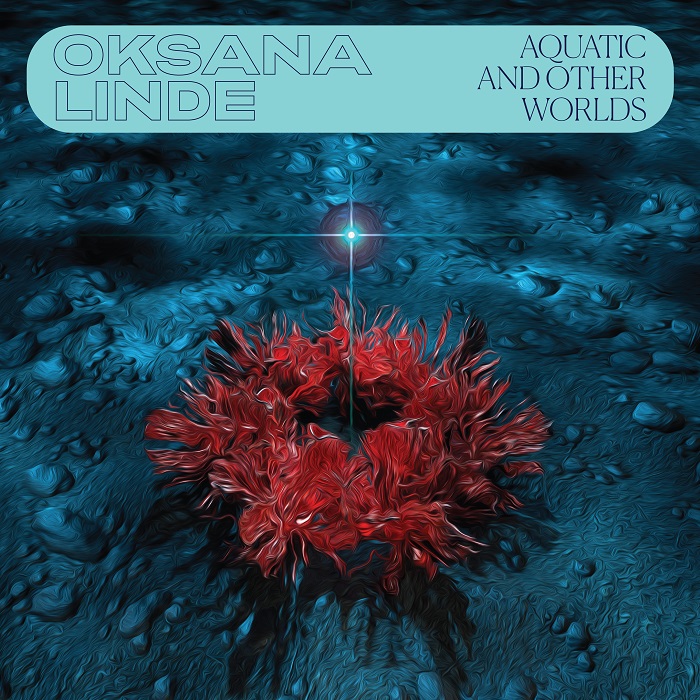 Venezuelan composer and keyboardist Oksana Linde, whose work remains largely unpublished save for a couple tracks on various artist compilations of electronic music, studied piano from a very young age. Although she studied chemistry and worked as a research scientist in the oil industry, her love of music never abated; in 1981, at the age of 33, she had to leave her job due to health issues, and at that point made a commitment to devote more of her life to music and art (she is also a painter). Over the years she had become aware of the synthesizer music coming out of Venezuela, Europe, North America, and elsewhere, and at that point decided to follow that path for herself, which began in 1983 when she borrowed a Polymoog and a Teac four-track open reel recorder to document her compositions, followed by more equipmentation in the ensuing years, including a sixteen track mixer, tape echo, drum machine and, of course, more synths. Aquatic and Other Worlds represents some of Linde’s earliest compositions from the 80s, compiled by Luis Alvarado of the Peruvian label Buh Records. In recent years, Linde has published her work on Bandcamp as single tracks, but this is the first time that she has released a full album of her own work, and hopefully there will be more to come. The twelve tracks herein are mostly shorter vignettes in the two-to-three minute range, although a couple numbers on the first side are far more involved and stretch out to five and six minutes.”Viaje Hacia la Luz” is one of those, beginning with vast sweeping alternating chords (think “Watcher of the Skies" intro) that are very reminiscent of a film soundtrack. With elastic rhythms and lively melody amid strange key changes, “Casino Playa Caribe” follows with a certain mysterious complexity. “Mariposas Acuaticas” opens the second side, a charming melodic diversion befitting of a nature film soundtrack, while “Descubrimiento” was almost certainly intended to serve as a theme for a television series, with its classical influences, bouncy rhythms and a strong sense of introduction, it stands among the most memorable pieces of the set. With the beautiful and shimmering “Orinoco,” much like the river of the same name, the piece is restless and beautiful as it flows through its four-minute duration. One thing that must be said, these recordings were rescued from very old tapes that have survived on four-track reels and cassettes for over thirty years, then digitized, and the tape flutter is often apparent when listening. Something that might have bothered me on the first couple spins, but has ultimately added to the charm. Hopefully the next installment of Linde’s work will be coming sooner than later.