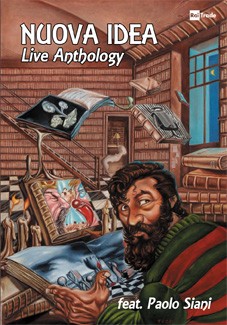 Nuova Idea is an Italian progressive rock band from the 70s who released three albums between 1971 and 1973. They were a keyboard-oriented rock band that played some very aggressive music. Then the band broke up. In 2011 Paolo Siani (drums) reformed the group and released a CD on Black Widow. Live Anthology documents the band then and now. First I must warn you that this is a PAL DVD, so it may not be compatible with US DVD players, but it may play on your computer. The DVD has several features: a slideshow, RAI archives, an interview with Paolo Siani, a concert in December 2012, and an excerpt of a concert in October 2012. Let’s start with the slideshow. We see a progression of the band from very young boys to now, accompanied by their music. As they got older, their hair grew longer, and today keyboardist Giorgio Usai sports very long white hair and a mustache. I have one complaint regarding the interview: it is all in Italian, of course, but there are no English subtitles, so it is a total loss watching this as I have no idea what they are saying. Next are the RAI (the official Italian television station) archives. Here we have seven rare archived performances by Nuova Idea from 1971 to 1973. But here is another problem: this one long video, about 24 minutes, so it is very difficult to locate a specific video if you are interested in watching “Sarà Cosi” for example. This should have been divided up into seven separate videos that you could watch all at once or individually, as is usually the case on a music DVD. All of the videos are in black and white. And, as typical with TV in the early 70s, the audience is very straight looking and appears bored for the most part, though the band did not let that affect them, except for the two songs from 1973. Here Nuova Idea just seems to be going through the paces. In the other videos, the band really cuts loose and shows a lot of aggressiveness and energy in their music and their playing. The highpoint is the performance of “Illusioni da Poco” with a full orchestra recorded August 26, 1972. The band was at their peak that night and the orchestra made for a very full sound, playing in front of a huge audience in the concert hall.

Fast-forwarding 40 years, we have the two concerts from 2012. Only three original members of Nuova Idea remain in the reformed band: Paolo Siani (drums), Ricky Belloni (guitar), and Giorgio Usai (keyboards). The are all in their 60s now, but they are surrounded by many younger musicians, including Paolo’s son Alessandro Siani (electronics). When all three of the original members are performing on stage, they capture the energy of their youth. But there are several songs with only Paolo on drums with the younger members. These tunes appear to be more orchestrated, some people are even reading music, and less spontaneous. All in all, the music is excellent and consistent with what we hear today, but what is missing is the spark that made their music so great in the 70s.