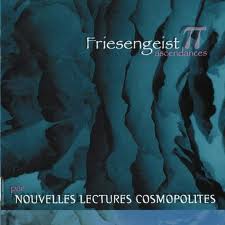 For the third installment of his Friesengeist series, Julien Ash has pared things down, utilizing only four musicians to augment his own keyboards and effects; previous releases featured eight or more. This lends a very intimate atmosphere to the music, making it a kind of modern chamber music that really doesn't resemble anything else I've heard. Melancholy piano is accompanied by violin, acoustic guitar, piccolo bass, and occasional female vocals on 15 mostly low-key pieces. Electronic touches vary from subtle spice to pretty much nonexistent, leaving the players to their own devices at times, or drifting for periods of indistinct ambiance consisting of unidentifiable noise — though never harsh or grating. All in all it's very mellow and reflective, definitely more suited to Sunday morning than Saturday night, and don't even think of listening to it in your car or on the subway. So while there is nothing to get excited about here (as excitement is not the goal), there's plenty to enjoy if you're looking for some beautiful music that isn't cloying.