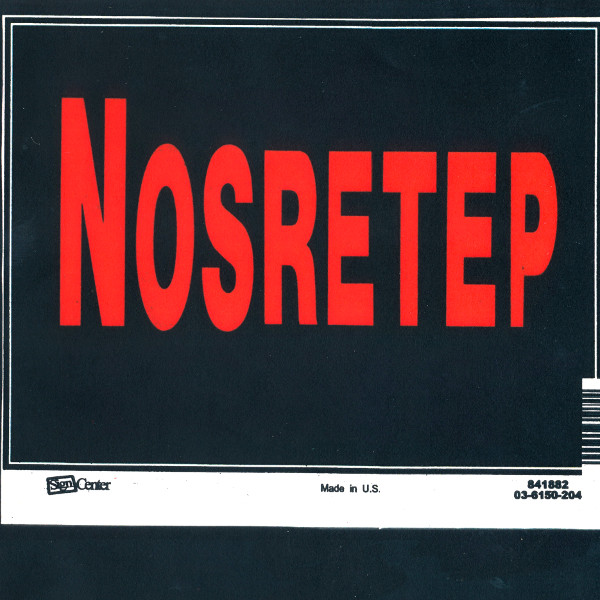 After seeing Nosretep play live several times and talking with them, they have come to exemplify the kind of musicians who play music for the love of it. The “business” side of the music business seems alien to them. As an example, we have this CD, produced in a limited edition and available mostly at their shows. The CD is packaged in a DVD case with home printed art that comes in a number of different designs. Drummer Mike Peterson mentioned to me that he had a bunch of old DVD cases around and saw this as a chance to get rid of them. The thing is, the music is really good. People should hear this! Take some kick-ass 70s-style rock riffs and mutate them into odd meters and add some voice samples for spice, and you’ve got the idea. The riffs remind me of the great first Captain Beyond album, maybe filtered through a kind of Primus post-punk filter, though without the crazy bass and vocals you get with Primus. Peterson’s drumming is very imaginative, grooving and rocking but with a way of building patterns that is unconventional. Igor Abuladze is a wild man on the guitar, taking basic heavy rock guitar parts and applying a twisted sensibility to them. He doesn’t indulge in lots of freaky effects, but lets his note choices and rhythms lift the music above the norm. In this context, bassist Andy Sells is often cast as the straight man, holding things together while the other two go nuts, but aside from the quality of his playing and the necessity of someone doing it, he does have his own moments to shine. This is definitely music deserving wider attention, and well worth the effort of tracking it down. Let’s hope their next recordings aren’t limited edition.

Jade Warrior - Elements: The Island Anthology – To start off with, we have four albums on two compact discs, a wise choice in consolidating this band's major works together in one bundle for your hungry consumers. The set comprises the...  (1996) » Read more