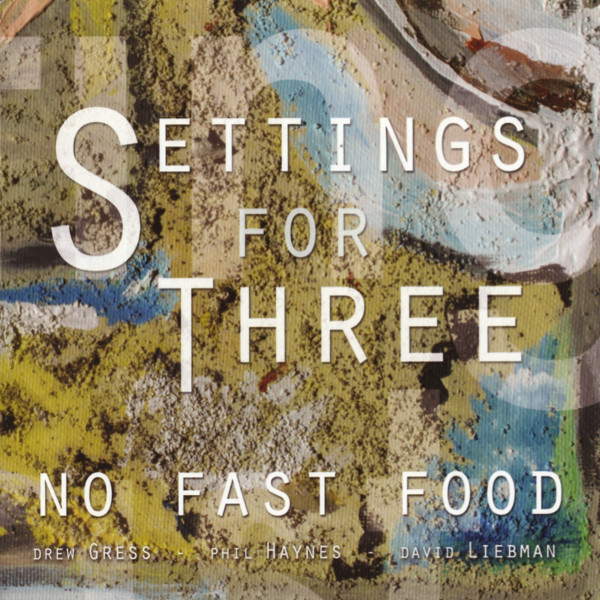 When last we met drummer Phil Haynes, he gave us Sanctuary, a set of pieces for solo drum kit. Settings for Three features one of the many projects Haynes is involved in, a trio with woodwind legend Dave Liebman and bassist Drew Gress, who should be well known to our readers from his work with The Claudia Quintet. This small ensemble gives each of the members lots of room to shape the character of the music, and they are all supremely skilled as both improvisors and at playing composed parts. Haynes gets credit for all of the compositions, which range from melancholy meditations to uptempo workouts. The album is dedicated to the memory of Paul Smoker (1941-2016), a trumpet player with whom Haynes worked extensively. The album’s longest piece is also the most obvious tribute, with the title “El-Smoke,” and a multipart structure that touches on many moods, from a thoughtful wooden flute with bass harmonics to a slinky groove with a ripping tenor sax to a bass solo backed by cymbal scrapes. Liebman is credited simply with “woodwinds,” and from listening, that would appear to include at least one kind of wooden flute, tenor sax, and soprano sax. The soprano occasionally verges on the kind of tone that makes it my least favorite member of the sax family, but Liebman saves the music by venturing into grittier territory at times. No matter the instrument, his playing is interesting and varied, free of stock licks, and informed by traditions well beyond American jazz. Gress lays down some great low end parts, and steps up for solos both plucked and with the bow, utilizing the freedom offered by not having a piano or guitar in the group to throw in chords from time to time. As for Haynes himself, his drumming represents a kind of harnessed chaos, always threatening to break out into freeform bursts involving everything within reach. But he keeps it contained and subtle, often relying on Gress to keep the tempo while he provides unexpected accents. He uses the kit fully, including minute variations of striking technique so that even consecutive hits on the same drum or cymbal don’t sound the same. The writing lends itself to a kind of craziness that sometimes sounds random, with brief bursts of double-time in the middle of a phrase or sudden turns into different territory. This is small-ensemble jazz at its best, with three masters at the top of their game.