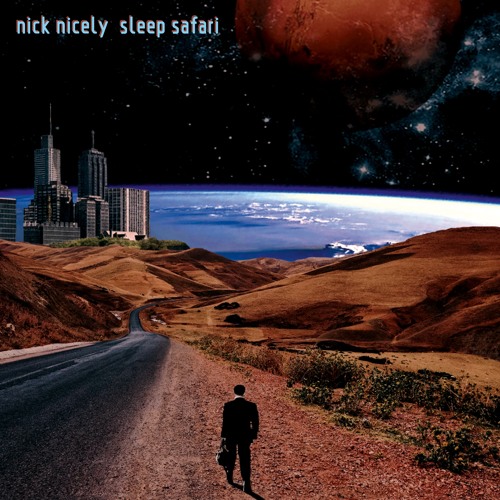 nick nicely’s latest chapter in his sonic journey is Sleep Safari, scheduled for release on September 29, 2017 on German label Tapete Records. This new recording is quite different from his last album, Space of a Second, that was heavily processed with his vocals difficult to understand at times. Plus Space of a Second required multiple spins for the music to grow on you. Sleep Safari is nick’s homage to unconsciousness, lyrically exploring sleep’s mysteries through a surrealist eye. The album opens with the line “3AM, you wake, the dream begins” and suddenly you are immersed in nick’s world of outré psychedelic techno electronics. The ten tracks take you on a variety of dark, moody, edge of consciousness excursions, replete with nick’s signature megaphone vocals. “London South 2 (Grasscut Remix)” from his 2015 London South single is included. Many of the songs have an 80s retro feel along with all of the little cosmic and experimental tidbits thrown into the compositions. The best track on the disc is “Ghostdream” and the obvious choice for the single. While most of the songs are sonic visions, “Heavens Kate” starts out with a melody before it turns into a mood. Overall, Sleep Safari is more accessible than Space of a Second and worthy of recognition. I also love the surreal cover art that reminds me of Hipgnosis' iconic album covers.