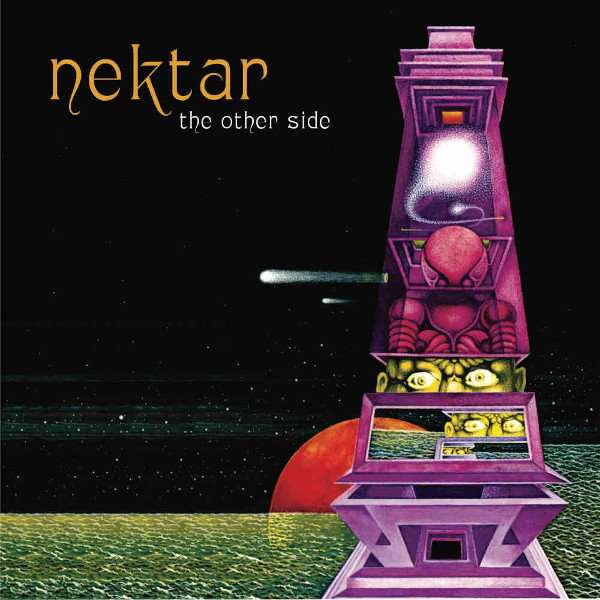 After hanging it up in the early 80s, Nektar resumed activity in 2001 and has been going since with some personnel changes along the way. The Other Side presents a band consisting of Randy Dembo (bass, guitar), Mo Moore (bass, vocals), Ron Howden (drums), Ryche Chlanda (guitar, vocals), and Kendall Scott (keyboards) along with visual wizard Mick Brockett. Howden, Moore, and Brockett all have beginnings with the band in 1969; Chlanda first started with Nektar in the late 70s; Dembo and Scott are relatively recent recruits. Long-time fans of the band should be happy with the overall sound, which hews to the band’s classic sound for the most part. With songs ranging from under three minutes to nearly twenty, there is stylistic variety without loss of cohesion. Highlights include the opening track, “I’m on Fire,” with a catchy melody and solid work from both guitars and keyboards, especially organ. The song called “Drifting” is quite nice as well, with a slow tempo in 9/8 and some nice synthesizer work. “Devils Door” is only 8:10 in length, but has an epic feeling. I like the way they play riffs in odd meters by make them feel natural and even a little funky. To my ears, Nektar’s classic albums of the early 70s represented an approach to progressive rock that was markedly different from Yes or Genesis, constructing their long pieces out of shorter sections that could stand on their own as normal songs — Jethro Tull and Procol Harum did the same thing at times. They haven’t lost that quality, with a mixture of multi-part pieces and individual songs that have the same general style. The Other Side may still not equal Remember the Future, but it is a worthy successor, and certainly superior to Magic Is a Child or The Prodigal Son.

Cold Fairyland & Lin Di - Ten Days in Magic Land, Bride in Legend, 2005 Live & Seeds on the Ground – One of the first musical things I discovered after moving to Beijing was this band from Shanghai. Their Chinese name (Lengku Xianjing) is taken from the Chinese title of a book by Japanese writer...  (2008) » Read more