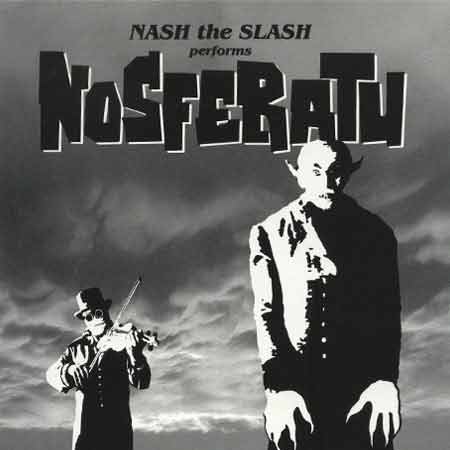 I’ve always had a weak spot for Nash the Slash. His goofy horror-show imagery and violin showmanship just bring a smile to my face. A soundtrack to the silent film classic Nosferatu, one of the first horror films ever made, seems like a perfect project for this Canadian original. In many ways, Mr. Slash is abnormally subdued this time out, with thirty short tracks (ranging from less than a minute to 5:27), some of which are adapted from Fauré’s “Requiem” and the “Danse Macabre” of Saint-Saens. It’s a one-man show, with overdubbed violins, mandolins, keyboards, and rhythm parts, and stylistically sticks fairly close to classical idioms, as seems appropriate for the music’s intended purpose. The somewhat claustrophobic sound of synthesized strings and sampled choir is perfectly suited to silent film accompaniment. The melodies are mostly pretty, soothing but with backing moods of melancholy and menace, and themes recur from time to time, tying it all together. Drum machine usage is infrequent, and not generally too obtrusive. His trademark fuzz-tone electric mandolin makes some appearances as well. Occasional sound effects (water noises, horses, and so on) heighten the effect, timed presumably with appropriate scenes in the movie. All in all, this is better than any other newly done silent film soundtrack I can think of. I hope someday to get hold of a copy of the film and play this album along with it. I’m sure it will fit better than Pink Floyd with The Wizard of Oz.