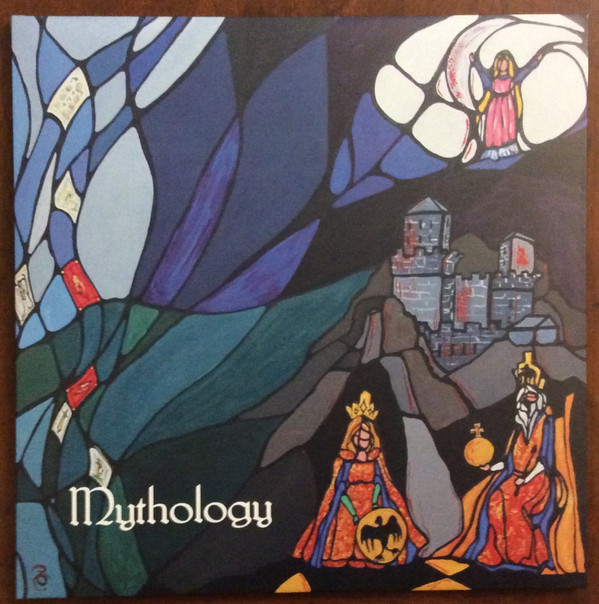 Mythology is a new band on Black Widow Records that is shrouded in mystery. The only information that I can find, other than what is included in the liner notes, is that they are from Switzerland. Performing under pseudonyms, the band members are Chad Samoth (drums), Athos Sade (lead vocals), Lady Sif (backing vocals), Aton Dasha (guitar), Dan Moses (keyboards), Santo Asteda (bass guitar), and Dana Shettom (sax and Mellotron). Their debut album, The Castle of Crossed Destinies, is a concept album based on Italo Calvino’s 1973 novel of the same name. The novel details a meeting between travelers who are inexplicably unable to speak after traveling through a forest. They can only communicate their tales through Tarot cards. Being totally unfamiliar with the novel, I am at a loss as to the meaning of the Tarot card images to the songs and album, pictured one per song in the booklet. The title track opens the disc and is associated with XXI The World. This card symbolizes assured success, a change of place, or a voyage. The next track, “MIssed Chances,” is associated with I The Magician, which symbolizes skill, diplomacy, subtlety, pain, loss, or disaster. The third song is “The Moon,” and is associated with XVIII The Moon. This card symbolizes hidden enemies, danger, or terror. The fourth track is “Now I’m Blind,” and is associated with X The Wheel of Fortune. This card symbolies destiny, fortune, or success. The fifth track, “The Emperor,” is associated with IV The Emperor. This card symbolizes the absolute ruler of the world, stability, power, or reason. And the closing track, “Don’t Be Afraid,” is associated with III The Empress. This card symbolizes truthfulness, action, or initiative. Be that as it may, the music is fantastic! Athos Sade has a beautifully resonant baritone, but sings the English lyrics with a slight accent. The band excels at heavy orchestral prog that occasionally touches on the mystical. Except for the title track, where the lyrics are from Italo Calvino’s novel, the rest of the song lyrics are original. “Missed Chances” is an interesting song with a heavy martial component that surprisingly reminded me of the Mandolorian theme. While not exactly Italian prog, there are enough gothic elements to please, along with some metal prog, and medieval touches. This is a great album and well worth your attention.