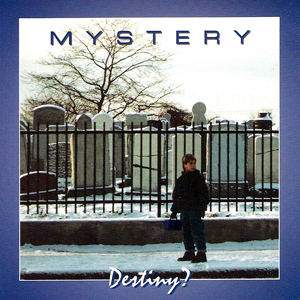 Yikes, my second guilty pleasure disc this time around! Mystery are a four piece from Quebec and on Destiny? they serve up some fine slices of progressive pop, often sounding like an updated version of Styx. Guitarist Michel St-Père seems to be the driving force behind the group as well as the disc and consequently most of the pieces are guitar and vocal oriented. Even though singer Gary Savoie is a dead ringer for Steve Perry, he manages to not fall into too many pop clichés. Bassist Patrick Bourque and drummer Steve Gagn‚ round out the lineup, with Gagn in particular turning in some killer performances. Standout cuts for me are "Legend" (the CD's sole instrumental), the title track, "Queen of Vajra Space," and "Shadow of the Lake," with its creepy and compelling tale of murder. All employ artful arrangements and tight playing as well as Savoie's solid vocals along with fine instrumental breaks which never distract or overstay their welcome. I even have to acknowledge that the more pedestrian tracks like "The Mourning Man" and "Submerged" are well performed and produced. In fact, the overall production value of the disc is very high and here St-Père deserves serious kudos. Whether or not Mystery goes anywhere or not is questionable unless 70s style progressive pop comes back into vogue though for those who pine for the sort of music bands like Styx and Saga used to crank out, this disc is a must.