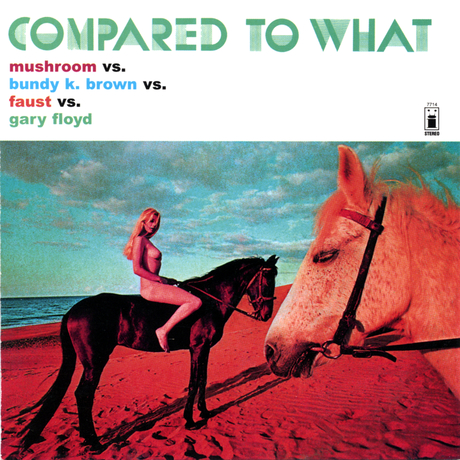 Yes, that’s the way it’s credited on the cover. The is a very odd collection of odds and ends basically centered around the band Mushroom, including soul covers, taped phone conversations, and long stretches of ambient sound. Any of these might be quite acceptable on its own, or surrounded by similar items (except the telephone thing, that’s just dumb), but in this context it’s hard to get into anything very much. The title track is indeed a cover of the late-60s Les McCann tune, here in a relatively straight rendition, setting aside burbling analog synths. Jon Birdsong’s cornet gets a lot of mic time, and Gary Floyd provides gritty soulful vocals. I suppose there is merit to resurrecting an old tune which still has some social meaning today. The second track, “I Got Blisters on My Fingers,” is a few minutes taken out of an instrumental tune “edited and manipulated” by Rick Wilson including the aforementioned phone tape, bursts of noise, and an abrupt ending which cuts straight into “For Men with Beards,” which is another snip of instrumental. It’s fine for what it is, then it drops off and we get “Foxy Music” and “Let’s Have Sex,” two long jams. From there on it’s ambient territory, with an interesting 22-minute track which would be great in a more harmonious setting. There are some good moments here and there, but I think it’s probably a bit too scattered for anyone but Mushroom fans, and overestimates the artistic appeal of jump editing.