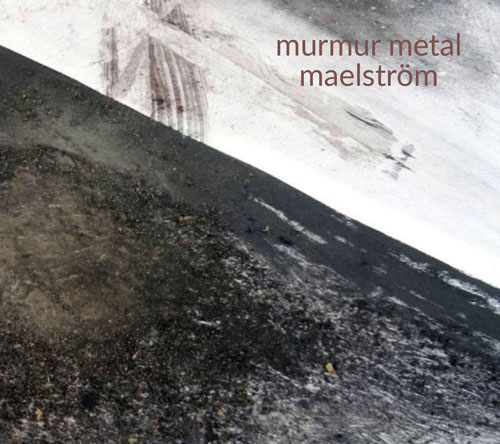 Murmur Metal is the project of French guitarist David Bausseron, who is part of the Muzzix collective, though don’t expect to hear a lot of guitar here – what little guitar there is comprises mostly scraping, percussive noises, and other extended techniques, seemingly secondary to the metal percussives that tend to dominate the three extended tracks of Maelström. The three tracks, simply titled “I,” “II,” and “III” are the result of ten years of experimentation with various metal objects, which at the outset of the project already included thin metal strips and slats of mechanical brushes along with halogen street lamp bases, and grew to include plates, lamellas, cages, portal covers, rods, iron straws, tin boxes, and saw blades, much of which was found in some dumpsters adjacent to a metal factory. The sounds he produces herein don’t include any of the traditional percussives that would produce any sort of beat or cadence, instead focusing on the free-form sounds that can be produced with metal objects in their most open sense as they crash and scratch against one another in various ways: noise art. Add to the instrument list some electric guitar — generally almost indecipherable as such, along with electronics — and again, we are talking of sound collage production, not traditional synthesizers and sequencers. There is nothing pretty here, but not really ugly either, just mostly interesting and captivating. The first two tracks were recorded back in 2013, about seventeen minutes total, focusing on the more abrasive elements of the sound, while they waited for completion of the third track of more recent vintage, a 25 minute dreamlike panorama (or perhaps a nightmare) which gives far more attention to those extended guitar techniques and electronic sounds, and is by far the most interesting piece of the three. Folks who enjoy the work of trailblazers like Thomas Dimuzio should find plenty of interest in these strange grooves.