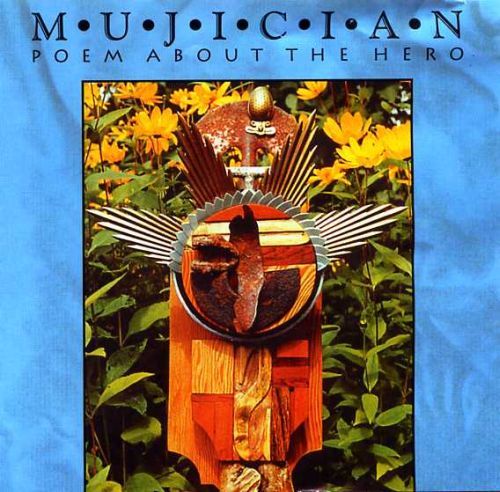 Despite a feel more reminiscent of the free-jazz of the mid-60s than of the 90s, Mujician's second all-instrumental release is a refreshing addition to the archives of improvised music. Featuring Keith Tippett on piano, Paul Dunmall on saxes, Paul Rogers on acoustic bass, and Tony Levin on drums and percussion (note that this is not the bald, stick-wielding Crimsonite), Poem about the Hero offers five busy, complex, tightly-played pieces. Ranging in length from one and a half to over thirty minutes, these improvisations, recorded live in the studio, are as unpretentious as they are discordant, and as uncompromising as they are enjoyable. This review would not be complete without a mention of the similarity of Mujician to John Coltrane's sound, especially the more experimental period right before his death. But they stretch things a bit, adding a distinctive European feel to it. Tippett's interplay with Dunmall is exquisite. They trade leads and licks, alternating easily between their own statements and backing up those of the other. Rogers' bass is always active, rarely repetitive. He gives the neck a workout as he nimbly travels its length, adding more than just rhythm to the sound. Levin is masterful in his drumwork. Always busy, he never stops playing up to the rest of the band. His style is unpredictable, but always in good taste. Easily one of the best drum performances this year. Mujician assault the listener with a barrage of sound, so dense and complex, it is hard to believe that it was improvised. There is so much going on, I am sure that this CD will be in heavy rotation for me for months to come. The only drawback is that the 70 minute length of the CD can be too much at once if you're not ready for it. But in the end I feel that many will appreciate this release. One of my favorites this year, Mujician proves that experienced musicians don't have to sound like they are over the hill. Recommended to jazz-heads, fans of improvisation, or anyone looking for something different.