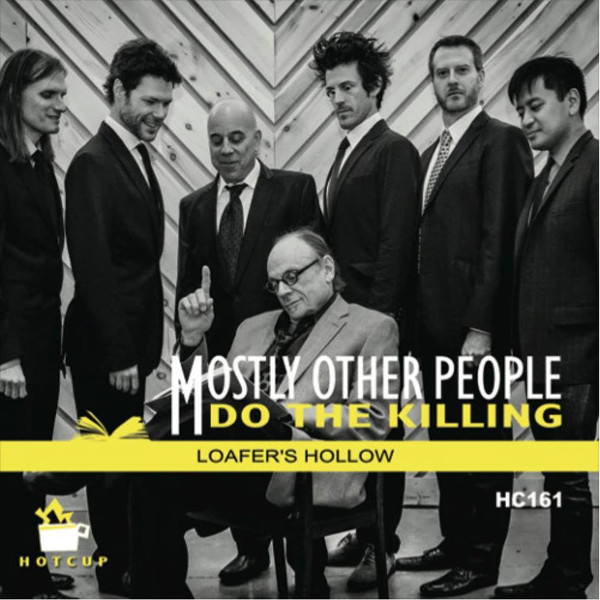 It’s been more than ten years since bassist Matthew “Moppa” Elliott formed Mostly Other People Do the Killing as a four-piece with drums, trumpet, and sax. Loafer’s Hollow is their ninth release on Elliott’s Hot Cup label, along with a handful on other labels. This set of tunes sees the group expanded to a septet featuring Elliott on bass, original members Jon Irabagon (saxophone) and Kevin Shea (drums), along with Steven Bernstein (trumpet), Dave Taylor (bass trombone), Brandon Seabrook (guitar, banjo, electronic), and Ron Stabinsky (piano). This is the same lineup that recorded Red Hot (2012) with the exception of Bernstein, who has replaced original trumpeter Peter Evans. The music is a fascinating melding of virtually every stream of jazz that has ever existed, starting with Dixieland and moving through swing, bebop, cool, free, and maybe even a hint of jazz-rock. And, like The Microscopic Septet, who similarly mix jazz styles from different eras, the music is a lot of fun to listen to. There are also commonalities with the small group recordings of Louis Armstrong, Count Basie, and Duke Ellington. The brass instruments are often muted, emphasizing the period sound, but there are some unexpected electronic touches from Seabrook that would throw off a traditionalist. Irabagon’s playing often strays from period authenticity, bringing in elements of later John Coltrane and Ornette Coleman and augmenting them with his own explorations of the outer reaches of what a sax can do. The trumpet and trombone occasionally venture into more modern sounds as well, providing some intriguing contrasts as they blow wildly over backing straight out of a Hot Seven session. Describing all of the surprising moments on Loafer’s Hollow would take as long as listening to the whole thing — suffice it to say this is one of the most creative jazz releases of the year, and if you’re put off by the unconventional juxtapositions, you need to lighten up. Or go back to your old 78s.