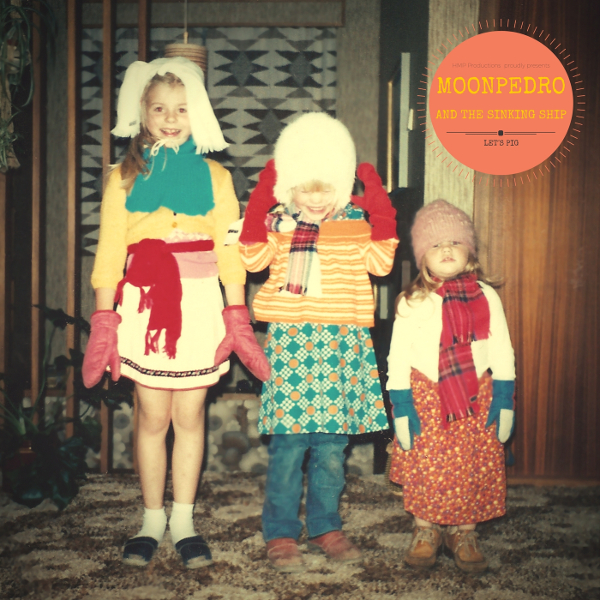 Moonpedro is the musical persona of Chilean-Norwegian writer Pedro Carmona-Alvarez, who has numerous novels and collections of poetry to his credit. For some ten years or more, he’s been supplementing his literary activities with songwriting, singing, and playing various instruments, and before that he was in a band called Sister Sonny. Let’s Pig is his second outing with The Sinking Ship, following Homegrown (2013); before that he released Moonpedro and the New Farm Street Orchestra Presents Ed Wood (2007), which could be pretty interesting if the music is as intriguing as the title. For this outing, The Sinking Ship consists of Annlaug Børsheim (violin, vocals), Anders Bitustøyl (bass), Lars Heintz (guitar, percussion), and Einar Sogstad (keyboards, percussion), with Carmona-Alvarez handling everything else. Not everyone appears on every track, ranging from a couple which are Moonpedro solo efforts to a few duos, trios, and a couple of quartets — never do all play together, so I wouldn’t really call it a band. The album presents nine tuneful songs written and arranged very smartly, with a variety of styles and sounds, ranging from jangly folk-rock reminiscent of classic REM to jaunty pop-rock like early ELO to humorously funky to reflective meditations on life. There’s a kind of lightly psychedelic sheen to the music that is very appealing, and the catchy melodies are likely to get stuck in your head. Moonpedro has a pleasant voice, and his singing really brings out the lyrics without sounding overly precise. Every track has something to recommend it, like the watery countermelody on “Book of Questions,” the warped echoing bass on “Afternoon,” the video-game bleeps of “Animals,” and much more. The lyrics occasionally remind me of the cadence of Leonard Cohen, though the voice is much more tuneful. Let’s Pig fits in stylistically with the best of the Smiths, the Church, the Chills, and REM’s earlier days. If there’s any justice, Moonpedro will get some attention in the hipster crowd — this album stands head and shoulders above most everything that gets fawned over in those circles.