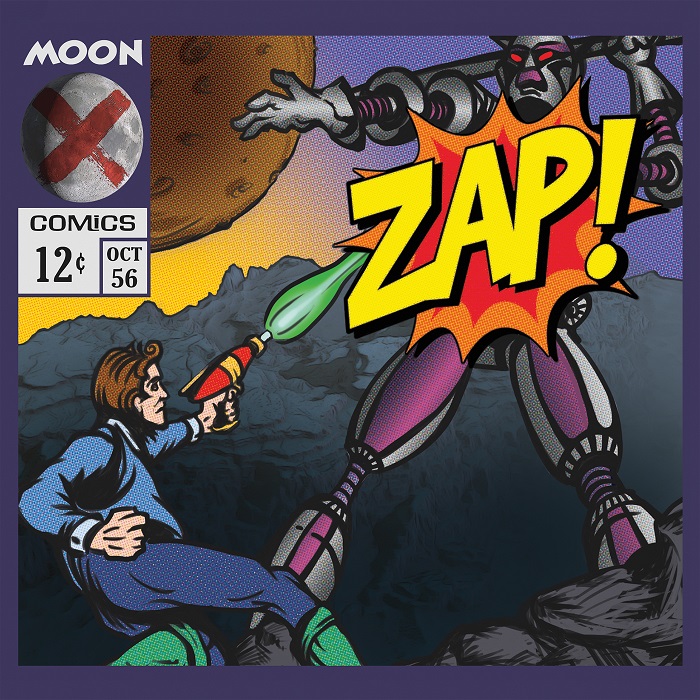 Moon Men released five albums between 2017 and 2020, but ceased operations during 2021, drummer Bill Jungwirth citing a physical disability which prevented him from continuing, and guitarist Bret Hart felt that he couldn’t continue as Moon Men without Jungwirth, and wanted to explore a more folk musical direction going forward with other musicians. The remaining members of Moon Men – bassist Jerry King (now doubling on guitar, voice and trombone) and Dave Newhouse (saxophones, flute, keyboards, voice) decided to continue as Moon X, adding Dave’s son George Newhouse on the drum kit. Zap! Is the premier Moon X album, hopefully with many more to come. Their music is mostly what one might expect, a powerful progressive jazz-rock sound featuring an abundance of woodwinds, guitar and keyboards at the top end, with King and the younger Newhouse supporting it all as a formidable rhythm section. Moon Men it is not, many of those sprawling improvisations seem to now be replaced with far more structured compositions. It’s not The Muffins either, the overt jazz sound seems to be more integrated into the rock fabric of the new band. George Newhouse is a clever and catchy drummer who supports the effort well while not drawing too much attention to himself, unless one listens carefully. “Trouble In Ranagar” is an exemplary piece that shows off the best in all three players. And the vocals? There really are no vocals in the conventional sense, just some spoken voice parts on some of the goofy short skits like “Pickman’s Brew” and “Interview With A Hooman” and a couple others that are integrated into the opening and closing moments of the opening title track, most barely a minute in length. They annoyed this listener at first, but eventually found their place in the humor department as amazing instrumental tunes like “Man of Tomorrow,” “Yggdrasil,” and the powerful closing epic “March of The Moon Shadows” came to the forefront to better let their presence be known. All considered, Moon X’s debut is an amazing effort that should be heard by all.