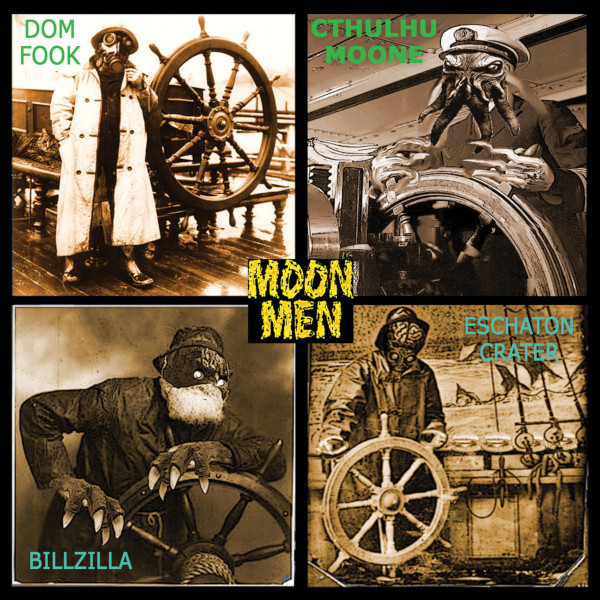 Here we have the space pirates’ fourth full-length intergalactic adventure, and I suspect most listeners who have heard their previous efforts would agree that this is their most engaging effort yet. The Moon Men are (clockwise on the front cover): Major Dom Fook (Dave Newhouse) on keyboards and woodwinds, Sgt. Cthulhu Moone (Jerry King) on bass and guitar, Eschaton Crater (Bret Hart) on guitar, harmonica, and electronics, and Billzilla (Bill Jungwirth) on drums and percussion. Of the album’s ten tracks, a full five of the source tracks were composed by Hart, two by Newhouse, two by King, and one by Jungwirth, but ultimately the source tracks are passed around and each member adds their own ideas to them, and thus they become group composed and arranged. And then the whole project is mixed and mastered by Ian Beabout. On their trajectory through space, Tales of the Space Pirates seems by far their most composed effort yet, although they have still left plenty of room for improvisation, which within their mode of working tends to be something of ad hoc arrangements. Some efforts that come together like this tend to be sloppy and inexact, but these same four members have been at it working together as Moon Men for a fair amount of time, and after five releases have arrived at an underlying fundamental that results in the best effort coming forward from all four players. Take “Sliding on the Moone” for example, where a catchy drum rhythm and snappy guitar figure give way to a superb harmonica part that carries the main melody for a fair while, then returns to a more elaborated take on the opening theme with additional bass and keyboards. With the exception of some grunted pirate sounds here and there, the entire album is effectively instrumental. The closer “Journey to the Plains of Obmurd” is one such piece where one of the four (details don’t say who) keeps reciting “ob-murd” in a distinctively pirate-like accent, it’s probably just a piece of a sampled loop that’s repeated at random times throughout the song. “Graham Crackers in the Monastery” blends a deep funky rhythm with twisted sitar-effected guitar until the saxes enter the room and carry the melody forward. Somewhere out in the void, “Space Hero Theme Song” (complete with kidzoids chanting) could well be the Moon Men movie theme, with random bizarro noisy sounds with some jazzy jammin’ flutes, piano, and organ. The scratchy electronic rhythm that accompanies “Paper Ball for Kitty” drives forward with organ and electric piano with several layers of saxes completing the epic. There’s a lot of great sounds and ideas combining here making for one of the most engaging albums yet by Moon Men.