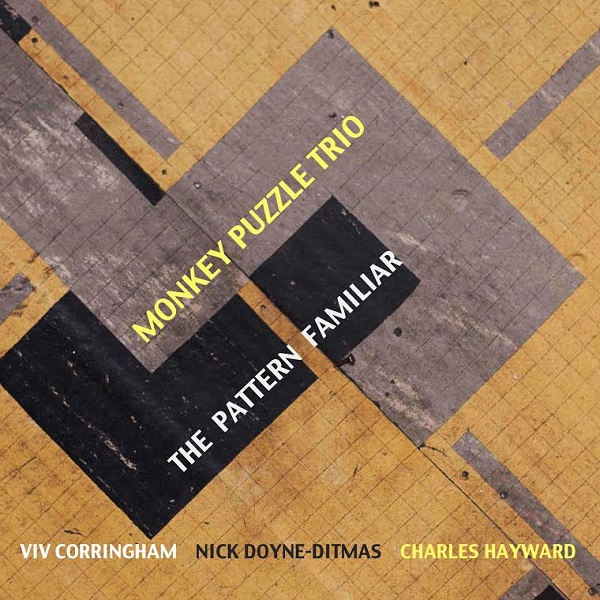 Monkey Puzzle Trio is a project featuring bassist Nick Doyne-Ditmas (of Crackle and Pinski Zoo), drummer Charles Hayward (This Heat, Massacre, and others) and voice / electronic artist Viv Corringham. The Pattern Familiar picks up where their 2010 debut White World left off, presenting a mix of spirited explorative improvisation and vocal / lyrical experimentation awash in unusual effects and electronics. In addition, Doyne-Ditmas leads a small four-piece horn section of cornet / flugelhorm / slide trumpet / euphonium, trombone, soprano and tenor saxes which augment the primary three-piece improvising unit via overdubs, adding additional power and punch to the proceedings. While bass and drumming present a suitable backdrop of free improvisation, sometimes drifting into what might even be loosely composed material, it’s Corringham’s voice and lyrics, fed through various loop pedals and effects that gives these twelve tracks their unique character, sometimes twisted and chaotic, sometimes larger than life, and sometimes downright annoying if the listener isn’t in the mood for what she happens to be doing at the moment – but it’s always interesting. I suppose it has been said, if one listens to something very strange enough times over, it eventually becomes normal, and so it is with this. It’s Corringham’s vocal and lyrical contribution for most listeners will be the make-or-break, though if one finds value in this sort of purely immersive experimentation, Monkey Puzzle Trio will be a sure bet.