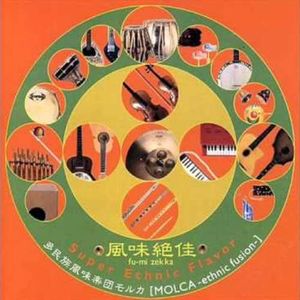 “Balkan Dawn” opens the disc in fine, atmospheric form, and shortly we’re treated to the unique sound of an Ashbory bass. This rather bizarre instrument is a 30-inch, two-pound electric bass with rubber strings that sounds like a double bass, with some potential for weirdness as well. The rest of the many instruments Molca uses are acoustic; some exotic, some standard, mostly too numerous to note here, though special mention can be made of some of the many variations on the “guitar” used, such as the folk guitar, classical guitar, banjo, bouzouki, sitar, and oud. Each song employs at least one of those in its foundation, along with some great violin, and often flute. As indicated by the disc’s title, the music is a fusion of various ethnic folk styles, from east and west Europe to the Middle East, Africa, and the Americas. This isn’t a jarring or starkly contrasting mix of styles however, as there is a very fluid and almost homogenous cohesion to the tracks. It’s a disc where the placement of throat singing and a dobro can nearly go unnoticed, and a tango and a Yiddish song don’t seem at all out of place. Though the band takes credit for the compositions, I would be surprised if some were not based strongly on existing songs. Much of the disc is delightful, some is very cool, while some of it veers a bit too far toward the sweet.