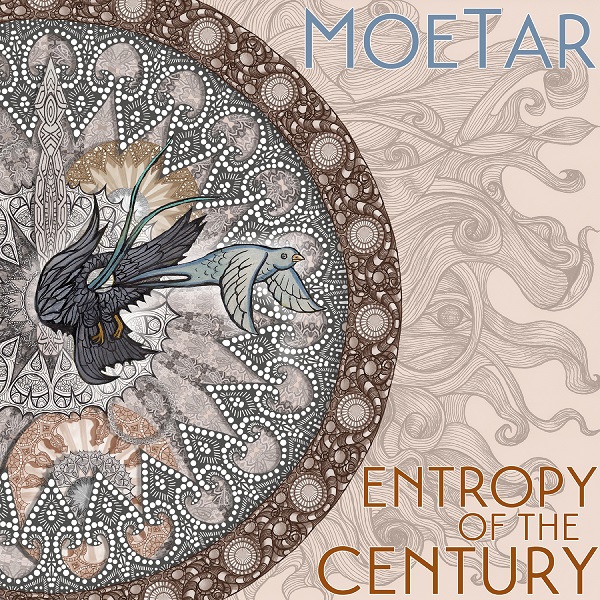 Sometimes a band comes along that is doing something so stunningly original and deserving of accolades that they are hard to ignore. Case in point: MoeTar, a five-piece who have been gigging around the San Francisco Bay Area for the last five years or so; they have one previous release From These Small Seeds to their credit, a debut album that seemed to be ambitious slightly beyond the band’s capabilities at the time, but nonetheless a serious accomplishment. With their latest Entropy of the Century, all the pieces of their unique musical puzzle are still in place, with more of the power, focus and refinement that only a few more years of playing together can bring. At the core of their sound is the dual frontline of singers Moorea Dickason and Tarik Ragab, the former responsible for all of the vocal arrangements, and the latter also the band’s bassist and primary songwriter. For many of the twelve cuts Dickason multi-tracks her own harmony parts, resulting in a sound that’s truly grand and widescreen. The voices are often studio-processed slightly to make them sound even larger than life. Each of the songs could be described as miniature complex prog epics, meticulously arranged, yet they still rock hard and mix a strong confluence of vocal jazz and classical elements into their stunningly unique vision. Rounding out the sound are ace guitarist Matthew Charles Heulitt, Matt Lebofsky on keyboards (also of MiRthkon), and drummer David Flores – all exceptional musicians who shine at every turn. Tracks like “We Machines,” “Where the Truth Lies,” the title track, and “Friday Night Dreams” are exemplary flashes of group brilliance on an album without a dull track on it anywhere. There are really no others to accurately compare the band to, however it might be said that those who appreciate the instrumental complexity and vocal prowess of early Yes, circa The Yes Album and Fragile, will certainly find MoeTar’s brand of visionary progressive rock to be of interest.