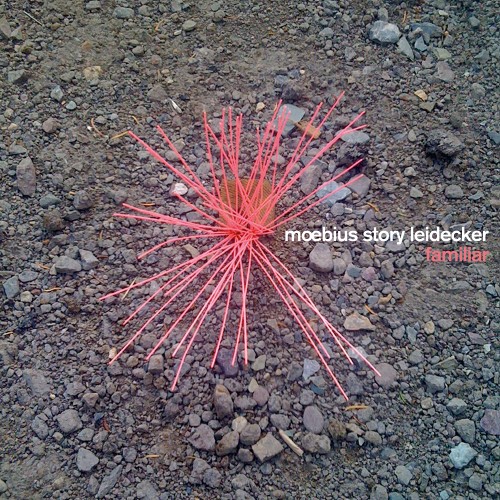 Dieter Moebius was a prolific musician all the way up to his passing in 2015, so much so that new Moebius music continues to be released. In the case of Familiar, Jon Leidecker (aka Wobbly from Negativland), US electronic musician Tim Story, and Moebius, along with Moebius’ wife Irene and Story’s wife Maggie, gathered together in 2012 at Whitefish Lake, Montana. They spent a few days exploring Glacier National Park. One day as the group was enjoying a spectacular view in the Rockies, Moebius spotted a pink construction marker half buried in the gravel at the side of the road. He snapped a photo of this man-made flower, which became the cover art for Familiar. Then the three musicians got down to work and started recording music using Cluster’s improvisational compositional approach. An initial set of music culled from these sessions was released as Snowghost Pieces in 2014. And now Bureau B is releasing the remaining music as Familiar on October 6, 2017. All three musicians brought different ideas to these sessions and the music is less like Moebius’ heavy rhythmic explorations of his final years and more like what he and Roedelius produced as Cluster in the late 70s, as on Grosses Wasser and their collaborations with Brian Eno. The first three tracks are built from odd electronic pops, squeaks, and scraping sounds that end up being downright strange sonic experiments. The title track is based around a tick-tock beat that over its seven minutes becomes outré. The other three tend towards the melodic with “We Need You in Our Soups” being a rhythmic ambient track, the constantly shifting “Block Blow" recalling Krautrock, and the pleasant and delightful epic Eno-esque “Vexed” closing the disc. So if Moebius’ compositions from his final days did not interest you, Familiar may be more of what you are looking for.