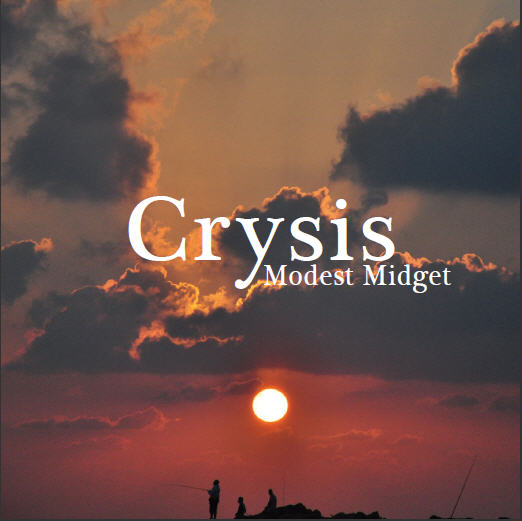 This Amsterdam-based band led by Israeli expat Lonny Ziblat has been completely rebuilt following their disintegration after the tour that followed the first album The Great Prophecy of a Small Man in 2010. During the downtime that followed, Ziblat recorded his solo album Songs from the Drawer, which was culled from material he had written that didn’t fit the Modest Midget style, and then got back to the business of putting his band back together, which now includes drummer Willem Smid and bassist Maartin Bakker, and for some of the recordings, keyboardist Tristan Hupe – the only other survivor from the first edition of the band, although Hupe left prior to the recordings being completed. The remaining members completed Crysis as a trio, with other players guesting as needed. Ziblat, for his part wrote all the material, plays acoustic and electric guitars, piano, keyboards, and sings all the lead and harmony vocals. There’s a wide array of influences from Ziblat’s diverse musical background that went into these twelve cuts, which combine elements of rock, pop, punk, progressive, folk, and just about everything else imaginable. The opening symphonic keyboard intro “The Grand Gate Opening” sounds like it could be a piece from a classic movie theme, and then segues directly into “A Centurion’s Itchy Belly,” which is a brilliant instrumental piece that combines proggy elements with a catchy foot-stompin’ klezmer-pop tune. Another wacky keyboard-driven instrumental “Flight of the Cockroach” is presented later in the program.

Vocals are introduced on track three, “Rocky Valleys of Dawn,” an indie-rock styled piece with a direct approach not unlike something Nick Lowe might have done back in the day. But on other tracks throughout, a far more sophisticated combination of lead vocals and harmonies are often used, sometimes approaching the Beach Boys or 10cc, exemplified on tracks like “Now That We’re Here” and “Crisis (Awake of the Sheep)”, the latter which incorporates additional saxes, oboe, recorders, and flute to create one of the album’s most powerful arrangements. “Secret Lies” is another catchy vocal tune steeped in early rock and roll traditions, with an unforgettable guitar driven arrangement, superb soloing and great vocal harmonies. Their ska cover version of the late Roy Orbison’s “Pretty Woman” is a fun diversion that pushes all the right buttons, while an electric piano driven jazzy-pop style is employed on “Periscope Down,” co-written with Bakker, resulting in what is probably the disc’s most accessible tune. “Praise the Day” is a simple vocal and acoustic guitar piece with piano accompaniment, with some added strings near the end, almost like something that could have been on one of McCartney’s early solo records. All taken, Crysis is a mighty impressive second outing for Modest Midget.

It Was Just a Squid