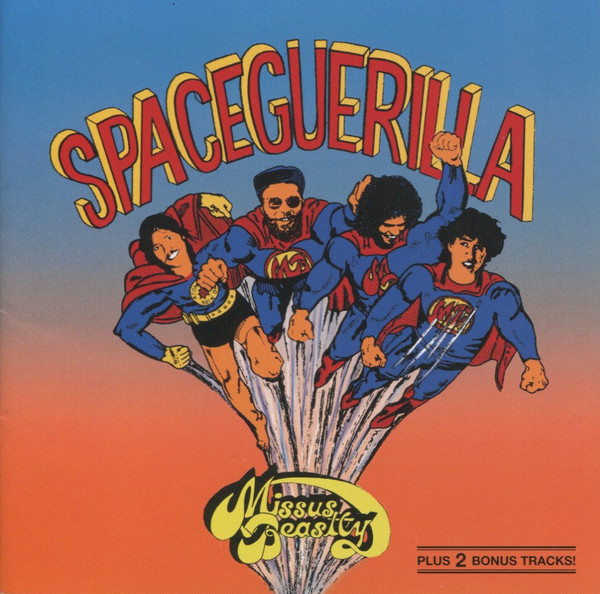 The eleven minute title track that opens the album is as clear an example how tight Missus Beastly had become over the years. A mindblowing jazz-rock instrumental that powers through numerous changes and sections along the way, it sets the stage for the remainder of the album. By 1978, none of the original members from the 1970 self-titled album remained in the ranks. Sax and flute player Friedmann Josch remained from the 1974 edition of the band (that released another excellent self-titled album, with the gorilla on the cover); Burkard Schmidl had joined prior to the 1976 album Dr. Aftershave and the Mixed Pickles on piano, organ, synth and guitars. New to the 1978 lineup were bassist Locho Richter (from Aera, replacing Norbert Dömling, who had left to join Joachim Kühn) and drummer Jan Zelinka (from the Elastic Rock Band), a formidable rhythm section if there ever was one. Space Guerilla would end up being the final Missus Beastly album, although some current and former members would go on to form Dr. Aftershave, and then Missus Beastly would again reform in 1982, with Schmidl and new members, athough there are no recordings from that period (until Garden of Delights discovers some!). Meanwhile, here in ’78, the band is operating in solid jazz-rock of fusion territory, tempo and instrumentation dependent, sometimes (when Schmidl is building a piece with electric piano) bearing similarities to the more aggressive Canterbury bands or their countrymen Aera, and at other times when the tempo is faster and synthesizers dominate, one can hear similarities with mid-period Return to Forever. No vocals anywhere — this is a purely instrumental outing. “For Flü” is a latter case in point, a seven-minute monster of fast-paced electric fusion, where Josch and Schmidl are trading solos between saxes and synths, with some occasional extended slow breaks for sensitive and emotional conversations between piano and flute, as the rhythm section eventially roars back to life and takes the piece on another wild ride. “Guitar for Sale” is another crazy journey, perhaps a bit reminiscent of mid-70s Soft Machine with a memorable melody driven by sax with heavier keyboard attack while Schmidl switches between keys and guitar. “Cose Dola (Dole Cosa)” is another slower paced driving fusion piece where every musician gets a chance to shine. Josch turns in a fine performance on overdubbed woodwinds on the tribute piece “Rahsaan Roland Kirk,” while the band shows their funkiest side on the humorously titled “Fuzzy, Don’t Go to the Disco,” where some uncredited violin shares the spotlight with winds as the song fades out. “Hoffmanstropfen” has powerful flute driving hard over a piano foundation with rhythm section building over its six minute duration. Two bonus tracks are included, taken from festivals in 1978 and '79, the first with Embryo’s Roman Bunka guesting, the latter in '79 was with a different bassist and drummer. One might easily conclude that Space Guerilla is Missus Beastly’s finest moment.