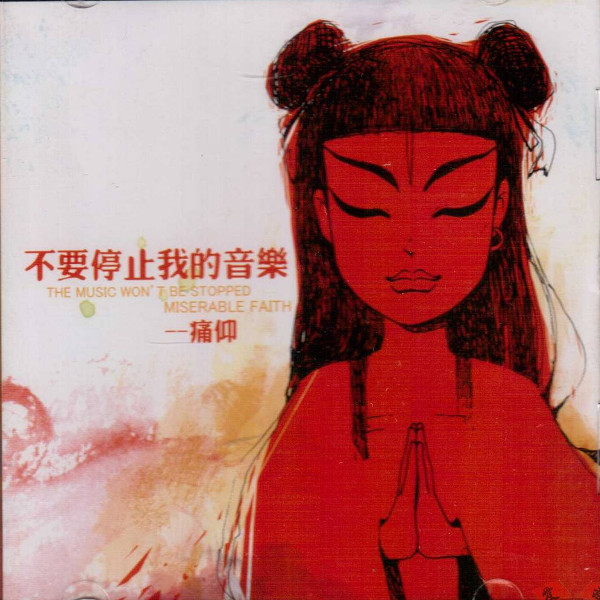 My introduction to this band came in 2008. I was living in Beijing, and rode my bicycle to a part of town I wasn’t too familiar with. I came across a music store and went in. I skipped past all the racks of CDs by foreign artists and found the Chinese rock section. One of the store’s clerks came over and asked me if I liked yaogun (Chinese for “rock music”), and I said yes, I was looking for new artists who I might like. He pointed out a number of things I was already familiar with, then pulled out The Music Won’t Be Stopped by Tongku de Xinyang, whose name is officially translated as Miserable Faith. The clerk told me they used to be a metal band but had expanded their sound, so I bought it on his recommendation. When I got it home and listened to it, I knew I had a winner. The first track, “Goodby Jack” in English, starts out with a reggae-rock beat, along the lines of when The Clash did reggae-inflected tunes, and there’s a nice staccato melody in between verses on one of the guitars. The chord progression has enough sophistication to keep it interesting, and the vocal line is catchy, though I suppose some listeners might find the rough vocal tone a bit off-putting. “Highway Song” is next, a song that could be roughly classed as alt-folk-rock, but with some really odd feedback at times – not loud or overbearing, but a nice subtle insertion of chaos into the track. It’s with the third track, “Low Altitude,” that they really had me hooked. There’s an insistent strumming guitar in a middle-high register, then the drummer comes in, and the phrase climaxes with a heavy riff for the full band, but instead of stomping on the distortion pedals like you might expect, they keep the tones on the clean side. Once the vocals come in, there are some backing parts that take from metal screaming, though not at the Cookie Monster level. The middle section breaks into a really tasty picked guitar part and builds slowly back up to even greater intensity. It’s a great rock tune. Other tracks mix it up even more, at times a blending of Rage Against the Machine with Nirvana, at other times surprisingly tender, with a folksy lilt and lovely backing vocals. There are also some nice production touches, including treatments on the drums, but they’re not overdone. With this album, Miserable Faith joined the elite ranks of Chinese bands who can just be called great bands without being qualified by their nationality. China has a relatively short history with rock music compared to most of the world, and not many bands have progressed to this level.

The Science Group - A Mere Coincidence – Yugoslavian composer Stevan Tickmayer has worked extensively in the fields of 20th Century music (both composed and improvised) and jazz. For this project, he takes a collection of texts by Chris...  (2000) » Read more

Nili Brosh Has the Feels