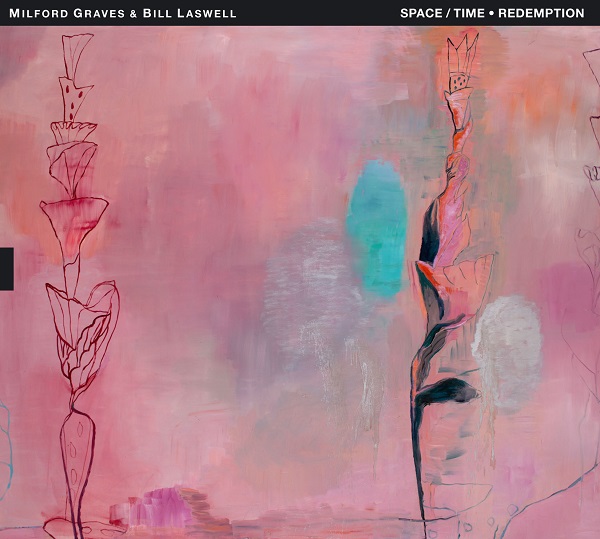 In this meeting of the avant-garde generations, one of the pioneers for free percussion, Milford Graves, joins up with a bassist who has nearly every genre imaginable on his resume – free improv, heavy metal, electronics, world music, you name it, Bill Laswell has probably done it. As far as bass-and-drums duos go, this is nowhere near the Ruins end of the spectrum, being a far-roaming, essentially beatless journey through possible musics. Graves utilizes a wide variety of percussive objects, from a conventional kit (or at least parts of it) to drums, shakers, metallophones, and whatever strikes his fancy. His playing rolls and tumbles, cascading in waves, and forces the listener to abandon expectations of timekeeping. This is something he’s been doing for decades, but still falls so far outside the norm that it’s worth noting. These are timbres, some bright and shimmering, some dull and indistinct, not mere parts in repeating patterns. Laswell gives us a range of different bass sounds, using effects to expand his possibilities, sometimes fluid and melodic, other times pointillistic and atonal. His parts have elements of planning to them, with repeating themes, but are very loosely interpreted. For those who have grown accustomed to Laswell as a purveyor of deep grooves more akin to Funkadelic than free jazz, this might come as a surprise, but he’s always had a streak of the outside in him. The overall mood is more on the meditative side than any kind of aggression, and, oddly enough, conveys a sense of calm. Space / Time Redemption has a lot to offer, though it may take repeated listens and the right attitude to soak in its message.

Kit Watkins - Beauty Drifting – This one was a real surprise. Watkins has always had a broad body of work in the electronic realm, but this album is something very different from his last few efforts, ambient or rhythmic. Beauty...  (1996) » Read more